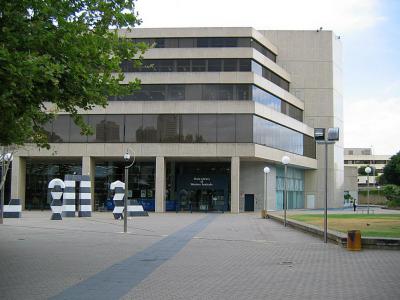 The Alexander Library Building, in the Cultural Centre of Perth, houses the State Library of Western Australia, J S Battye Library and State Records Office. The sloped walkway just east of the building runs roughly along the alignment of the old Museum Street, which ran between James Street and Francis Street. The street had one of the most mixed and unique streetscapes in this area of Northbridge - which was all removed in the construction of the new library building.

Only one building is commemorated on the Alexander Library Building structure - the Perth Baptist Church which was in Museum Street from 1899 to 1979. The Theosophical Bookshop and library was long established at the corner of Museum and James Streets. The streetscape can be found in Wise's Directories for the earlier decades.
Image by Cygnis insignis on Wikimedia under Creative Commons License.
Sight description based on wikipedia