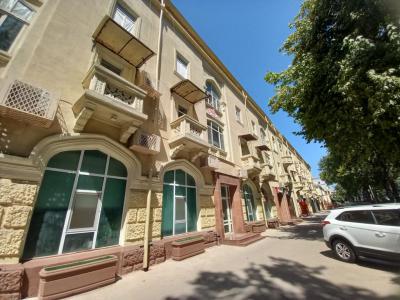 Alisher Navoi Avenue is one of the oldest and central-most thoroughfares of Tashkent. Prior to 1893, it was called Toshkocha and Kattakocha, and then was known as Shaikhontohur.

Back in the old days, the street used to connect the city proper with the artisans-inhabited neighborhoods. Among the traces from that period, still in place, is the mausoleum of Sheikh Khavandi Tohur, built in the 15th century. Other than this and the 19th-century Eshonquli Dodkhoh madrasah, there were practically no large buildings in the area.

Under the Russian colonial rule, in the second half of the 19th and the early 20th century, the street became busy linking the new, Russian-built part of town with the old part. In 1884, the first Russian school was opened here, the first tram line was put into operation, and, in 1908, the first kerosene lanterns in Tashkent were installed.

In 1938, the avenue got its current name, marking the 500th anniversary of the nationally-beloved poet and thinker, Alisher Navoi, one of the pioneers of vernacular language in the literature of Uzbekistan. His statue, outside the Alisher Navoi State Museum of Literature, was installed in 1949. Another statue of Navoi, in the "Alley of Poets", was inaugurated on February 9, 1991, on the occasion of his 550th anniversary.

The vast majority of the buildings currently seen here were constructed during the 1930s-70s. These include the Ministry of Agriculture and Water Management (1930), the Central Telegraph, the "Vatan" cinema (1937-1940), and the Palace of Culture and Labor (1940) presently occupied by the Museum of Literature and the Young Spectators' Theater.

Many of them feature typical look of Stalinist Empire architecture, with strong “national” highlights borrowed from Central Asian traditional motifs. Symmetry, columns, large front entrances and impressive balconies are in stark contrast to the later architecture. The Navoi Museum itself is exemplary of this, as is the building across from it, and further down the street eastward, the current Ministry of Health. Toward the Anhor canal, residential buildings from that era have a different kind of charm – slightly run-down but clearly majestic in their heyday.

Navoi Avenue is also an important shopping destination; its section between Independence Square and Circus is lined on both sides with numerous stores and boutiques. Here, you can shop till you drop for pretty much everything, from clothes to accessories to organic food to souvenirs. And to make it even more pleasant and less exhausting, there's no shortage of cafes and restaurants either.
Image Courtesy of Wikimedia and Jamshid Nurkulov.
Sight description based on Wikipedia.