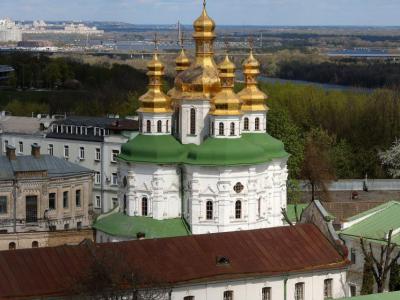 The All Saints Church is a relatively small, Ukrainian Baroque temple situated near the Ekonomichna Brama (the Economy Gate) in Kiev. The church forms part of the Pechersk Lavra Historic-Cultural Preserve and, as such, represents great historical and artistic value.

It was built in 1696–1698 by Ivan Mazepa, hetman of Ukraine (governor second in command, after the monarch) and active nationalist. His generosity to the project afforded the All Saints Church lavish decoration by some of the best Ukrainian artists of the time. As a token of gratitude, the church bore Mazepa’s coat of arms on its façade until he was denounced by Imperial Russia as a traitor (for siding with the Swedes at the Battle of Poltava in 1709) and his coat of arms was replaced by an icon. The coat of arms returned to its place only in 1991, after Ukraine had gained independence following the breakup of the Soviet Union.

One of the masterpieces inside the church is the iconostasis, dating to 1741, carved in wood and gilded. In 1906, the church’s walls were redecorated by a group of 22 painters, led by Ivan Yizhakevych. The group succeeded in creating an integral mural painting which today can be admired by the church visitors. Several older paintings were also uncovered and restored.
Image Courtesy of Wikimedia and George Chernilevsky.