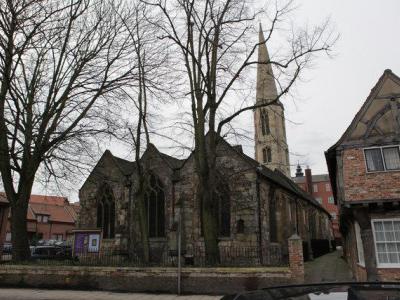 Located near the Ouse River, next to a row of 15th-century timber-framed houses, is the church boasting an impressive tower with an octagonal spire. Known as the All Saints Church, it was founded in the 11th century, though much of the current building appeared much later. The earliest part of the nave is from the 12th century, the arcades date from the 13th century, and the east end was rebuilt in the 14th century, when the chancel chapels were added.

The land on which the church stands was reputedly donated by Ralph de Paganel, a Norman tenant-in-chief, whose name is commemorated in the Yorkshire village of Hooton Pagnell.

The church was extensively restored between 1866 and 1867, seeing the new south aisle wall, a porch and a vestry added, half of the roof replaced, and new seating and organ provided. The chancel screen was installed in 1906, designed by Edwin Ridsdale Tate, who also rebuilt the 15th-century anchorite house in 1910.

The church is particularly noted for one of the finest collections of medieval glass in York, mostly dating from the early 14th century. Perhaps the most famous of it is the depiction of the Prick of Conscience, dating from circa 1410, which illustrates the 15 Signs of Armageddon. Another famous window is The Corporal Acts of Mercy. It depicts the Blackburn family of influential traders, specifically Nicholas Blackburn, the then mayor of York, who is said to have paid for the window.