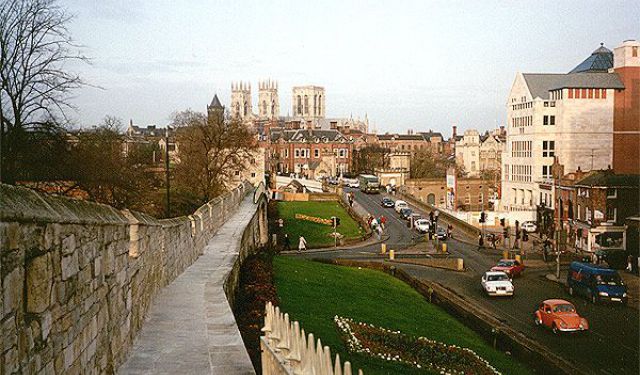 Image by Steve nova on Wikimedia under Creative Commons License.

York’s city wall has remained intact since the Roman occupation. The city was named Eboracum by the Romans and referred to as Eoforvic by the Angles. To the Vikings, it was Jorvik and the Normans gave it the name York. Take this tour to discover the attractions along York's ancient city wall.
How it works: Download the app "GPSmyCity: Walks in 1K+ Cities" from iTunes App Store or Google Play to your mobile phone or tablet. The app turns your mobile device into a personal tour guide and its built-in GPS navigation functions guide you from one tour stop to next. The app works offline, so no data plan is needed when traveling abroad.

Through the south, the wall’s smallest gateway, you will find Victoria Bar. Opened in 1838 in order to provide access between Nunnery Lane and Bishophill, during its construction the splinters of an ancient gateway were discovered. Archaeologists traced the gateway, known as the lounelith, and determined that it had perhaps served as a small entrance to the city in medieval times.
Image by Krystian Hasterok on Wikimedia under Creative Commons License.
2

The name of this four-storey-high gatehouse is from the Old Norse 'mykla gata' or 'great street'. Constructed in the 12th century, it gave rise to two traditions of British history. It served as a ceremonial gate for monarchs entering the city, beginning with Richard II in 1389. Also, the heads of Henry Percy (1403), the 3rd Baron Scrope of Masham (1415), the 7th Earl of Northumberland (1572) were displayed here as a warning to dissenters.

The Bar was inhabited until the 20th century. The upper two floors contain living quarters, which today are a museum known as the Henry VII Experience at Micklegate Bar. A restoration of the Bar was completed in late 2017.

Image by Nilfanion on Wikimedia under Creative Commons License.
3

The Multangular Tower is the western corner tower of the Roman fortress and consists of both Roman and medieval architecture. The tower has 10 sides, from which it derives its modern name "multangular", and is 19 feet (5.8 m) high. It was built in its late Roman form during the early 4th century when it was constructed with three floors to house a catapult. Five Roman stone coffins are in the tower, which were brought from graveyards in other areas of York.

A 76-foot (23 m) section of 4th-century wall connects the Multangular Tower to a small interval tower. The side of the wall and towers facing into Museum Gardens is carefully faced in stone, as during the Roman period it was on display. The other side is rougher because it was originally covered by an earth bank. The wall and towers were still in use after the end of the Roman period in Britain, and were subsequently incorporated into the medieval city walls. As late as the English Civil War they were being used to defend the city, and there is a hole in the wall along from the Multangular Tower that was made by a cannonball during this period.

Why You Should Visit:
This is one of a number of sites in the Museum Gardens which makes them so special. Doesn't look much but very interesting and dynamic inside.

Tip:
Be sure to venture beyond the facade of the tower to see the remains of the original Roman wall – and the way in which the many stone coffins have been put to more modern use.


Image by ChrisO on Wikimedia under Creative Commons License.
4

Although much of Bootham Bar was built in the 14th and 19th centuries, it also has some of the oldest surviving stonework, dating to the 11th century. It stands almost on the site of Porta Principalis Dextra, the northwestern gate of Eboracum. It was named in the 12th century as "barram de Bootham", meaning bar at the booths, after the nearby market booths. It was the last of the bars to lose its barbican, which was removed in 1835.

One interesting historical anecdote is that in 1501 a door knocker was attached to the bar's entrance in order to prevent Scots from entering the town. Nowadays, of course, all are welcome. Be sure to check out this historical landmark when visiting York.

Why You Should Visit:
This is the closest gate to the Minster and between here and Monk Bar you will find the most popular and attractive section of the City Wall.
Unparalleled views of gardens, Minster, university, neighborhoods.

Tip:
The first floor has a square paved area which is worth a look round before you go to the walls via a black steel gate.
Image by james denham on Wikimedia under Creative Commons License.
5

Ranking as the tallest and most elaborate of York's surviving medieval city gates, the Monk Bar was constructed in the early 14th century as a self-contained fortress, with each floor capable of being separately defended. On the front of the bar is an arch supporting a gallery, including 'murder-holes' through which missiles and boiling water could be rained down upon attackers. Later, it was used to jail unruly Catholics, and you can experience what it was like to be a "bad Catholic" by squeezing yourself into the cramped Little-Ease Prison tucked away in one of the towers. Today, Monk Bar houses a fascinating museum dedicated to Richard III and has the only working portcullis in York, complete with spiked railings. It is also the start of one of the nicest sections of Wall Walk between here and Bootham Bar.

Tip:
Access is either from the Wall Walk or from street level via a narrow staircase.
Image by Tony Hisgett on Wikimedia under Creative Commons License.
6

Most of Walmgate Bar was built during the 14th century, although the inner gateway dates from the 12th century. It was originally called Walbegate, the word Walbe possibly being an Anglo-Scandinavian personal name. The Bar's most notable feature is its barbican, which is the only one surviving on a town gate in England. It also retains its portcullis and has reproduction 15th-century oak doors. On the inner side, an Elizabethan house, supported by stone Tuscan order columns (originally of Roman origin but modified in 1584), extends out over the gateway. The house was occupied until 1957.

The Bar has been repaired and restored many times over the years, most notably in 1648, following the 1644 Siege of York in the English Civil War when it was bombarded by cannon fire, and in 1840 after it had suffered years of neglect. It was also damaged in 1489 when, along with Fishergate Bar, it was burnt by rebels who were rioting over tax raises.

Tip:
Make sure to stop by Gatehouse Coffee which is set in the gatehouse and makes full use of the space, including the outside space on the Bar. Fantastic spot to break up a walk around the City Walls and brilliant cakes!
Image by Paul Glazzard on Wikimedia under Creative Commons License.
Sight description based on wikipedia
7

This Bar originally dates from around 1315, when it was documented as being called Barram Fishergate. The Fishergate Bar once served as the city entrance from Selby. In 1489, a peasant revolt took place where the enraged citizens rushed into York, burning everything, including the Fishergate Bar. Once the rebellion was defeated, the bar was restored.
Image by Krystian Hasterok on Wikimedia under Creative Commons License.
Sight description based on wikipedia

Start your tour of York’s Old Town at the Museum Gardens. Walk along Shambles, a medieval street and see its narrow houses, pavements and its famous Snickelways. Climb the spiral staircase of Clifford's Tower for a great view of the town. Take this tour to experience the history of this very old city.

Undoubtedly, York is the most haunted city in the UK. Meet phantoms of Roman soldiers at the Treasurer’s House. Drop in at the York Arms to see the nun's ghost looking for her baby. Solve the mystery of the vanishing ballet slippers at Thomas's Hotel. At Yorkshire Terrier, discover the ghost of the old gentleman who is watching for burglars. And finally, enjoy the art of intimidation...  view more