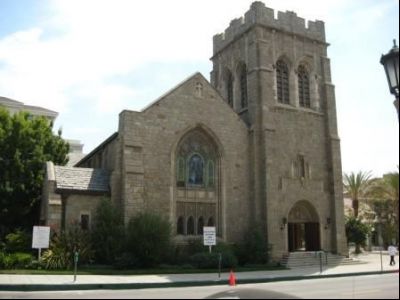 All Saints Church is an Episcopal church and part of the Episcopal Diocese of Los Angeles. The current building is the third home for activities of this church.

The church has a reputation of being one of Southern California's most liberal churches and one of the largest Episcopal churches in the country. Former Rector Ed Bacon said that political activism "is in the DNA of the church."

The church began in November 1882 when eleven people gathered in the home of Mr. and Mrs. C.C. Brown for services conducted by the Reverend Trew. In 1885 the congregation dedicated its first church building at the corner of Colorado Blvd. and Garfield Ave. on April 5 (Easter Day). The parish continued to grow rapidly, and a new site was purchased at 132 North Euclid for the building of a 600-seat church. First services were held Easter Day, April 21, 1889. The congregation outgrew the church building, and a new church building was built in 1923. It opened in 1924 and has been in service since then.

All Saints bought additional property in 1926–7, where it built a parish hall and rectory. They were also designed in the English Gothic style, and form an integrated courtyard with the main church.

In 1980, All Saints was listed by the National Park Service on the National Register of Historic Places as a Contributing Structure to the Pasadena Civic Center District.
Image by Doncram on Wikimedia under Creative Commons License.
Sight description based on wikipedia

Want to visit this sight? Check out these Self-Guided Walking Tours in Pasadena. Alternatively, you can download the mobile app "GPSmyCity: Walks in 1K+ Cities" from iTunes App Store or Google Play. The app turns your mobile device to a personal tour guide and it works offline, so no data plan is needed when traveling abroad.

The city of grand architectural heritage unmatched by any other Southland destination, Pasadena is famous for an array of beautiful buildings and construction engineering marvels. Many of the local buildings, such as the Blacker House mansion designed by Charles and Henry Greene, have starred in movies, TV shows and commercials. To check out some of these recognizable locations, iconic public...  view more

Only ten miles away from Los Angeles but having a distinct character, Pasadena is most famous for being host to the Tournament of Roses Parade and Rose Bowl. With a location at the San Gabriel Mountains' feet, the city initially received its fame as a resort town in 1886.

The city's name comes from a word in the Chippewa language that translates to "Crown of the Valley."...  view more