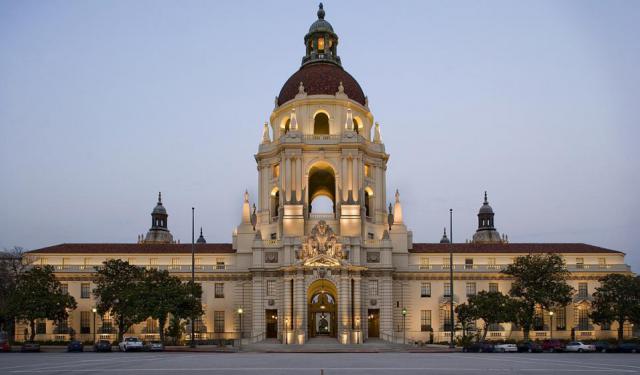 The city of grand architectural heritage unmatched by any other Southland destination, Pasadena is famous for an array of beautiful buildings and construction engineering marvels. Many of the local buildings, such as the Blacker House mansion designed by Charles and Henry Greene, have starred in movies, TV shows and commercials. To check out some of these recognizable locations, iconic public buildings and residences of Pasadena, follow this Part II Architectural Jewels walk!
Image Courtesy of Wikimedia and David Wakely.
How it works: Download the app "GPSmyCity: Walks in 1K+ Cities" from iTunes App Store or Google Play to your mobile phone or tablet. The app turns your mobile device into a personal tour guide and its built-in GPS navigation functions guide you from one tour stop to next. The app works offline, so no data plan is needed when traveling abroad.

St. Andrew's Catholic Church was founded in 1886 and it is the oldest Catholic parish in Pasadena and one of the oldest in Los Angeles County. Its Romanesque Revival campanile bell tower is visible for miles and is one of the landmarks of Pasadena. The interior of the current church, built in 1927, was modeled after the Basilica of Santa Sabina in Rome, while the façade was modeled after the church of Santa Maria in Cosmedin, down the hill and slightly upriver from Santa Sabina.

The current home of St. Andrew's Church, built in 1927 at an estimated cost of $1,000,000, is widely regarded as one of the most beautiful and important churches in Southern California. The style of architecture, without and within, is that of early Christian churches of the Byzantine era. The architect, Ross Montgomery, and the church's pastor, Msgr. McCarthy, both traveled to Italy studying early Byzantine architecture to find inspiration for the new church in Pasadena. The Los Angeles Times later commented on the contributions of Montgomery and McCarthy: "The collaboration of the architect and the priest has produced an edifice that will remain a monument to the memory of both." Montgomery and McCarthy found their principal inspiration at Santa Sabina, a basilica in Rome built in 432 A.D., on which they modeled St. Andrew's.

Image Courtesy of Wikimedia and Cbl62 (talk).
Sight description based on Wikipedia.
2

Pasadena City Hall, completed in 1927, serves as the central location for city government in Pasadena and it is a significant example of the City Beautiful movement of the 1920s. In 1923, the people of Pasadena approved a bond measure issuing $3.5 million towards the development of a civic center. City Hall was to be the central element of this center.

The San Francisco architecture firm of Bakewell and Brown designed the City Beautiful and California Mediterranean of Mediterranean Revival Style and Spanish Colonial Revival Style architecture influenced City Hall. It was completed on December 27, 1927 at a cost of $1.3 million. It measures 361 feet (110 m) by 242 feet (74 m), and rises 6 stories. There are over 235 rooms and passageways that cover over 170,000 square feet (16,000 m2). The defining dome, located above the west entrance, is 26 feet (7.9 m) tall and 54 feet (16 m) in diameter.

The City Hall has long been a favorite shooting location for filmmakers. The courtyard was used in the 1995 movie "A Walk in the Clouds" to portray a Napa Valley town square. It has also been used as an embassy in the "Mission: Impossible" television series, and a villa in Charlie Chaplin's Oscar-nominated 1940 film "The Great Dictator." Pasadena City Hall currently serves as the city hall of fictional Pawnee, Indiana, in the television show "Parks and Recreation."

Image Courtesy of Wikimedia and Bobak Ha'Eri.
Sight description based on Wikipedia.
3

Scottish Rite Cathedral was built in 1925 in a Moderne and/or Zig Zag Moderne style.

Architecturally significant in greater Los Angeles as a pre-PWA Classical Moderne building with distinctive decorative guardian sphinxes, the Scottish Rite Cathedral is associated strongly with the social history of Pasadena, in particular with the Scottish Rite, an appendant body associated with Freemasonry.

The building was designed and/or built by Joseph J. Blick and W.C. Crowell. Joseph Blick is remembered for the Scottish Rite Cathedral and designed many homes in Pasadena.

In 1984, the building was deemed eligible for listing on the National Register of Historic Places based on its importance and documentation thereof, but the building was not finally listed (NRIS reference number 84003894, decision date October 3, 1984). The listing was cancelled due to owner objection, which under terms of the National Register program, vetoes the listing.

The building was built in 1925. It cost approximately $300,000, was described as magnificently furnished and was dedicated at a ceremony on February 18, 1925 attended by approximately 1700 high-degree masons and their families.

As of 2020, the building is still in use by the Scottish Rite organization.
Image Courtesy of Wikimedia and Doncram.
Sight description based on Wikipedia.
4

The Pasadena Playhouse is California's state theater and has welcomed audiences with top-notch entertainment for over 100 years. This theater's auditorium seats 686 in a building constructed in Spanish Colonial Revival-style. Many of the plays by top playwrights such as Eugene O'Neill, F. Scott Fitzgerald, and Tennessee Williams premiered at this theater.

This theater stands out because of its superior acoustics and stage design that helped it become an early pioneer in community theater. Taking a tour of the theater is a perfect way to learn valuable insights about its history and the actors who helped make it famous. Visiting the green room provides an exciting look into all the preparation required for actors to get ready when appearing on-stage.

Another exciting part of the tour is a visit to a Craftsman-style library that offers all kinds of exciting information. The decor inside the auditorium area reflects the building's 1920s origins. This theater also boasts modern lighting and other effects that bring the sets to life.
Image Courtesy of Wikimedia and JuanKenobi.
5

5) Robert R. Blacker House ("Back to the Future" Movie Site)

The Robert R. Blacker House, also known as the Blacker House or Robert Roe Blacker House in Pasadena, enjoys status on the National Register of Historic Places. This unique home was constructed in 1907, and each part of the home features custom designs. A major restoration took place between 1994 and 1999.

Some of the highlights of the home's construction include Douglas fir and California redwood. The design used for this home incorporates many of the elements used in Japanese homes. Some of the key features include windows that allow for natural lighting and a cross-ventilation layout that allows more cool air in.

The Blacker House has a claim to fame because of its use in the Back to the Future movies. In the movies, the house provided the interior shots for scenes that took place in Doc's house. Even though many of the interior items seen did not survive the renovation, visitors may still tour the grounds.

This house is worth visiting to see the grounds and appreciate the artistry that went into its construction.
Image Courtesy of Wikimedia and John L. Poole.

Only ten miles away from Los Angeles but having a distinct character, Pasadena is most famous for being host to the Tournament of Roses Parade and Rose Bowl. With a location at the San Gabriel Mountains' feet, the city initially received its fame as a resort town in 1886.

The city's name comes from a word in the Chippewa language that translates to "Crown of the Valley."...  view more