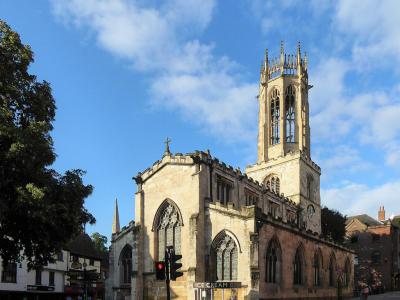 Much of the All Saints Pavement Church was built in the 14th and 15th centuries.

Its most prominent feature is the octagonal lantern-tower from 1400, which had been a beacon for travelers for many years. It boasts a hexagonal pulpit from 1634, and several fittings from St. Saviour and St. Crux, whose parishes, among others, were united with it. Most notable additions are the 15th-century west window with scenes from the life of Christ, the east windows by Kempe, and the 12th century 'doom' knocker on the north door.

The chancel was demolished in 1780 and the east end was rebuilt in the course of the 1887 restoration, by George Edmund Street, when the stonework was cleaned, the pinnacles restored, and the central east window fitted with stained glass by Charles Eamer Kempe. Previously, the north wall and the west end were rebuilt in 1834, and the lantern – in 1837. The vestry was added between 1850 and 1855.

Despite all these modifications, the remains of the medieval chancel-arch can still be seen above the east window inside the church.

Nowadays the All Saints Pavement Church is the guild and civic church for the city of York, and the regimental church for the Royal Dragoon Guards.
Image Courtesy of Wikimedia and Chris06.
Sight description based on Wikipedia.