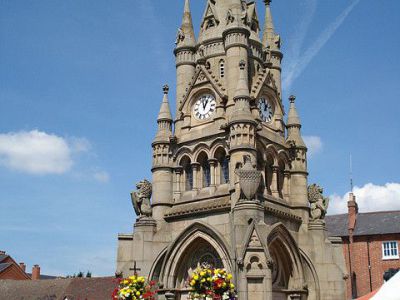 The American Fountain is a beautiful Stratford-Upon-Avon landmark. The Gothic clock tower with a roundabout fountain, was established in 1887 in honor of Queen Victoria's jubilee.

Design is by Jethro Anstice Cossins. Dedication by the actor Henry Irving. The tower is in three stages including arches, recesses, roundels of flowers and fruit carvings. The second stage has a triple arcade, turrets and spiralets. The top has clocks in gables, and figures of Puck, Mustard Seed, Pea-blossom and Cobweb Ltd, fairies-at-law.

It was a gift from George Childs, a Philadelphia newspaper magnate, and that's why it's called the American Fountain. The opening ceremony featured Henry Irving, famous Shakespearean actor. The fountain also features inscriptions and quotations from famous Shakespearian plays.
Image by RachelH_ on Flickr under Creative Commons License.