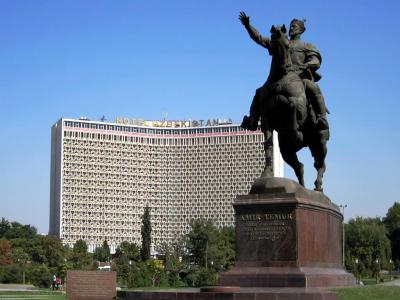 Situated in the very heart of Tashkent, Amir Temur Square (Uzbek: Amir Temur xiyoboni) is the main town square in the capital, equally popular with locals and tourists.

The square was built in 1882 by the Russian architects, Nikolai Ulyanov and Mikhail Chernyayev, on the site of a public park at the intersection of two main lanes, Moscow Street (now Amir Timur Street) and Kaufman Street (now Milza Ulugh Beg Street), and was initially called Konstantinovskaya Square.

It was not paved, getting all dusty in dry weather and muddy when it rained. In 1913, a multi-figure monument to the first Turkestan governor-general, Konstantin Kaufman, was erected here, upon which the square was renamed Kaufmansky.

After the 1917 Russian Revolution, the square was renamed once again, this time as Revolution Square; the Kaufman monument was dismantled, in 1919, but its granite pedestal remained. During the late 1940s, it was reused to accommodate the statue of Joseph Stalin, and was ultimately removed only in 1961, as part of the nationwide de-stalinization campaign. In 1968, a sculpture of Karl Marx was put in its place.

Before that, in the 1950s, the square underwent significant reconstruction. Owing to its convenient central location, it regularly drew attention of the people who wished to express their political views. Here, alongside frequent communist rallies, starting from the late 1960s, the Crimean Tatars, who were deported by Stalin to Uzbekistan in 1944, also demonstrated several times, without authorization, demanding to be allowed to return to Crimea. Throughout the 1980s, this place was a popular hangout with both “golden” youth and small-time criminals, attracted by the nearby cafe-restaurant (open until late hours), several ice cream parlors, and the alleys lined with benches.

In 1994, three years into Uzbekistan's independence, the square was renamed Amir Timur. The Karl Marx monument was dismantled and a bronze equestrian statue to Tamerlane was installed. Simultaneously, all the drinking and entertainment establishments in the vicinity were liquidated in a bid to tackle crime, prostitution, and idle pastime.

In 2009, another round of comprehensive embellishment was carried out bringing in new walkways, benches and modernized lighting, as well as well chopping down some of the old trees. Their place was taken by the newly-planted sakuras, chestnut and other trees. The effort proved worthy, as, beginning from the 2010s, the area has once again become regularly crowded with townsfolk, prompting the authorities to reopen the previously closed eateries and souvenir shops.
Image Courtesy of Wikimedia and David Stanley.