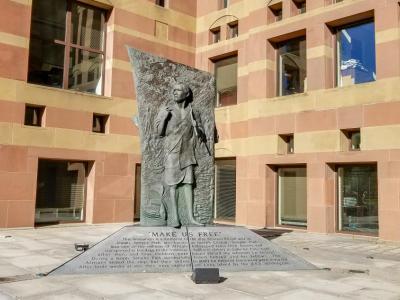 The Amistad Memorial in New Haven is a bronze sculpture created by Ed Hamilton to recognize the events of the 1839 Amistad Affair. The latter involved kidnapping of 53 Africans and their subsequent mutiny aboard La Amistad ship. It led to a historically significant United States Supreme Court case, in which the Amistad captives were ruled to be acting in self-defense, thereby granting them the right to mutiny.

After the Amistad Africans won their court case, and their freedom, many members of the community volunteered their aid: the residents of New Haven gave them housing, tutoring, and legal aid. Participating residents formed the Amistad Committee; among them was John Quincy Adams, who defended the Amistad captives in their case in front of the Supreme Court. The Amistad captives assimilated into the community, and would spend time in the town's Green with the locals.

The memorial sits in front of the New Haven City Hall on Church Street, the location where the Amistad slaves were jailed during their trial. It was dedicated on September 18, 1992.

Each of the three sides of the memorial depicts Joseph Cinqué: on the first side, in his native clothing in Africa, on the second side, in court during his trials, and on the third side, after he won his freedom. The monument has a fourth side, facing up, which is only visible from the upper floors of the City Hall. It depicts a face and hands in water.
Image Courtesy of Flickr and Bart Everson.
Sight description based on Wikipedia.