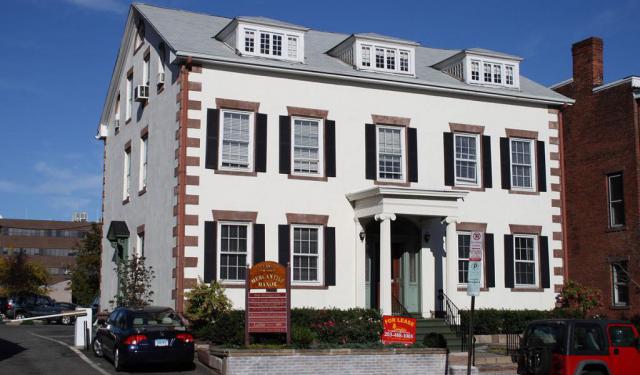 Image by Sage Ross on Wikimedia under Creative Commons License.

New Haven is a city of architectural diversity, hence the variety of architectural styles depicted in its churches, houses and buildings. Almost every corner has a building that is somewhat related to art and history. Take this tour and enjoy New Haven's greatest sites.
How it works: Download the app "GPSmyCity: Walks in 1K+ Cities" from iTunes App Store or Google Play to your mobile phone or tablet. The app turns your mobile device into a personal tour guide and its built-in GPS navigation functions guide you from one tour stop to next. The app works offline, so no data plan is needed when traveling abroad.

Battell Chapel at Yale University was built in 1874-76 as a Civil War memorial, with funds donated by Joseph Battell and others of his family. The chapel was designed by Russell Sturgis, Jr. in High Victorian Gothic style of rough brown sandstone. It was the third of Yale's chapels and is the largest on-campus house of worship.

The Apse Memorial Windows were designed by the architect Russell Sturgis and installed by Slack, Booth & Co. of Orange, New Jersey in 1876. At the top of the center window appears the name of an early benefactor of Yale University, Elihu Yale. The chapel was built to provide space for daily chapel, which was mandatory at Yale for students until 1926. Built together with Durfee and Farnam Halls at the corner of College and Elm Streets, the chapel was also part of an ongoing program to build up the perimeter of Old Campus and separate it from the rest of the city. The Battell Chapel clock, with chimes consisting of five large bells that rang at each quarter hour, was at one time the clock to which others at Yale was synchronized; however, the chimes have been silent for years.

Image by unknown on Wikimedia under Creative Commons License.
Sight description based on wikipedia
2

The John Cook House is a Federal style building, that dates from c. 1807. It is one of the oldest stone buildings in New Haven. The house has a rare feature, in that it includes sandstone quoining. It was built by or for one John Cook, a merchant and tailor. The house was later purchased by Charles Atwater, Jr.. It was listed on the National Register of Historic Places in 1983. It's adjacent to the 1828 Caroline Nicoll House, another NRHP-listed building. David Hoadley designed the third-floor ballroom.
Image by Sage Ross on Wikimedia under Creative Commons License.
Sight description based on wikipedia
3

The Imperial Granum-Joseph Parker Buildings is a listing of two buildings on 0.9 acres (0.36 ha) on the U.S. National Register of Historic Places. The Imperial Granum Building, built in 1875, is at 47 Elm Street and the Joseph Parker Building, built separately in 1877, is at 49-51 Elm Street. The buildings came under one owner in 1945, and the buildings were joined in upper floors by brick walls being broken through. Also a shared, interior staircase was created. The combo is also known as Del Monico Building.

According to the 1986 National Register nomination, the Imperial Granum Building, named for a patent medicine, has the only cast-iron facade in New Haven, and the Joseph Parker Building is the best surviving example of Victorian Gothic commercial architecture in the city. A store named DelMonico Hatter occupied part or all of the first floor, in photo included in the nomination.

Image by Sage Ross on Wikimedia under Creative Commons License.
Sight description based on wikipedia
4

The Lafayette B. Mendel House is an historic Italianate house designed by New Haven architect Henry Austin. It was the home of Yale University physiology professor, Lafayette Benedict Mendel from 1900 – 1924. The Lafayette B. Mendel House was declared a National Historic Landmark in 1976. The building now houses a law firm. Mendel helped bring the study of nutrition into the scientific realm.
Image by Staib on Wikimedia under Creative Commons License.
Sight description based on wikipedia
5

Also known as the Little Theatre on Lincoln Street, the Lincoln Theatre is an interesting piece of architecture constructed in 1924. It was designed in modern free-style according to the plans of Samuel G. Russell and George H. Gray. The structure made of concrete, stucco and wood is not only remarkable for its physical appearance, it is also important as a surviving element of the 1911-1933 Little Theatre Movement.
Image by Staib on Wikimedia under Creative Commons License.
6

David S. Ingalls Rink is a hockey rink designed by architect Eero Saarinen and built between 1953 and 1958 for Yale University. The building has since been renovated by Kevin Roche and Roche-Dinkeloo, the firm which is a direct outgrowth of Eero Saarinen and Associates. It is commonly referred to as The Whale, due to its appearance. The rink stands at the intersection of Prospect and Sachem Streets.

The building was constructed for $1.5 million, which was double its original cost estimate. It seats 3,500 people and has a maximum ceiling height of 23 meters. The building is named for David S. Ingalls, Yale class of 1920, and David S. Ingalls, Jr., Yale class of 1956, both of whom were hockey captains. Members of the Ingalls family were the primary benefactors of the arena. The building was included on the America's Favorite Architecture list, created in 2007 by the American Institute of Architects.

The rink employs an innovative structural system in which a 90 meter reinforced concrete arch, from which a cable net is hung, supports a timber roof. This causes a stable, double curvature form. Exterior cables linking the arch directly to the outer edges of the roof were added during structural design development. These cables address forces caused by asymmetrical wind loads. Fred N. Severud was the structural engineer for the project.

Image by Gunnar Klack on Wikimedia under Creative Commons License.
Sight description based on wikipedia