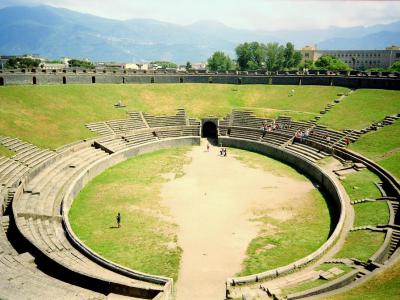 The Pompei Amphitheatre is the oldest building of its kind to have survived from the Roman era. Pompei houses many of the best preserved examples of Roman architecture, after the city was buried under volcanic ash for almost 2000 years. The Amphitheatre, one of Pompei’s most well known attractions, predates the Coliseum in Rome by over a century. It is believed that the success of the Pompei Amphitheatre, the first stone arena built within the Roman Empire, was the inspiration for a larger stone-built arena in Rome itself.

A circular structure with arches and stairways creating several entrance points, the Amphitheatre is still considered by crowd control analysts to be a near perfectly designed venue. Built around 70 BC, it was initially known as the Spectacula. Paid for by wealthy local statesmen Quinctius Valgus and Marcius Porcius, it was primarily used to host gladiatorial games and ceremonies. Twenty years before the eruption that destroyed Pompei, games were banned at the Amphitheatre, following a brawl between locals and residents of nearby Nuceria. In recent years, UK progressive rock band Pink Floyd became the first people for almost two thousand years to perform at the arena, filming a live concert here.
Image by Lord Pheasant on Wikimedia under Creative Commons License.