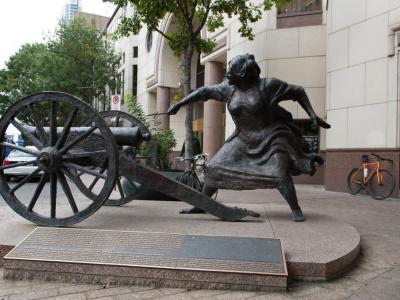 Angelina Belle Peyton Eberly (July 2, 1798 – August 15, 1860) was an innkeeper and a hero of Austin, Texas in the Texas Archive War. In 1836 she met and married Captain Jacob Eberly, a widower. They moved to Austin in 1839, opening the Eberly House. On October 18, 1839, President Mirabeau B. Lamar and his cabinet dined in her tavern and his successor, Sam Houston, resided at Eberly House rather than the presidential mansion.

In December 1842, Houston ordered the secret removal of the archives of the Republic to safekeeping in Washington-on-the-Brazos. Mrs. Eberly, realizing that the symbols of national government were being removed from the city, fired a six-pound cannon into the General Land Office Building, arousing the town to what they considered theft. The ensuing conflict became known as the Archive War, which was won by the Austinites, preserving Austin as capital of Texas and keeper of the archives.

A bronze statue of Angelina Eberly, created by Pat Oliphant, stands near the place where Eberly helped preserve Austin as Texas' capital city.
Image by Patrick on Flickr under Creative Commons License.
Sight description based on wikipedia