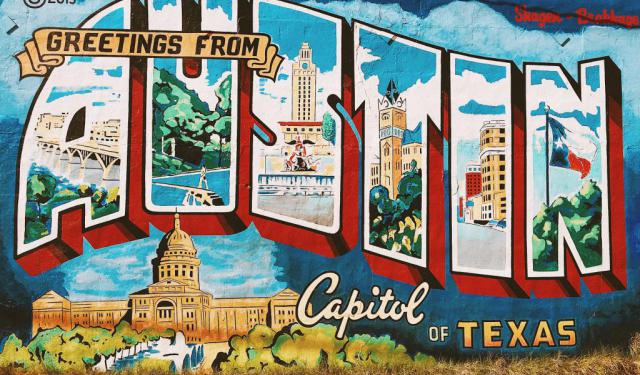 Austin, Texas may be famed as the “Live Music Capital of the World,” but its street art is as vibrant, funky and diverse as its plentiful music venues. Texas’s capital is peppered with dozens of murals, sometimes in the most unexpected places, among which are several truly iconic pieces like the Historic 6th Street, “Hi, How Are You?” and Austintatious, that illustrate the quirky side of the city to a tee.

These murals are a mix of both commissioned work and unsanctioned drawings that survive because of widespread public support which turned the Austin into a thriving space for aspiring artists. Take this self-guided walk to enjoy some of the most impressive pieces of street wall art that make Austin, TX a unique gem!
Image Courtesy of Wikimedia and Hpaymay.
How it works: Download the app "GPSmyCity: Walks in 1K+ Cities" from iTunes App Store or Google Play to your mobile phone or tablet. The app turns your mobile device into a personal tour guide and its built-in GPS navigation functions guide you from one tour stop to next. The app works offline, so no data plan is needed when traveling abroad.

If you find yourself at 6th Street in downtown Austin, you won't be able to miss the Historic 6th Street mural, right off the Southbound Interstate 35 access road! Designed and painted by Sanctuary Printshop in 2012, this colorful mural pays homage to Austin as the “Live Music Capital of the World,” featuring all the things that make it great, from its history to rockin’ music scene. This is an essential stop for all Austin newbies and makes for a great Insta-worthy photo opportunity. Just be careful taking a shot of this mural, as you will have to cross the street on a very busy intersection from a highway feeder.
Image Courtesy of Flickr and Jon Fingas.
2

A former school teacher, Mike "Truth" Johnston – author of the “Spaceman with Floating Pizza” mural – is well-known throughout Austin for painting everything, from street art to commissioned works. His creations can be found on many murals around the city, as well as on the side of Google Fiber vans. When not painting on vans and walls, he is often busy creating posters using wheat paste.
Image Courtesy of License to use Creative Commons Zero - CC0.
3

Painted by Puerto Rican artist Ana Maria, aka Ana Marietta, this jaw-dropping Human-Insect Hybrid mural was created as part of SXSW in 2015. The artist, who often depicts human and insect anatomy in mixed-up forms and with great precision, used to study animal sciences at University of Puerto; hence the expertise. Her in-depth knowledge of animal biology, and that of bugs in particular, is clearly visible in the painstaking way she depicts her humanoid creatures.
Image Courtesy of License to use Creative Commons Zero - CC0.
4

Ask anyone to name a mural associated with Austin, and chances are they will say, “Hi, How Are You?” This simple talking frog painted on the side of the former music store, now Thai restaurant, near the University of Texas campus, is one of the most beloved murals in Austin. The iconic piece was created by Daniel Johnston, who is also a musician, in 1993. Named “Jeremiah the Innocent,” it was originally created at the request of the record store Sound Exchange. People erroneously believed the frog was named after the bullfrog in the Three Dog Night song “Joy to the World”, until in a 2016 interview Johnston revealed that it was the press that came up with that name. As for the mural itself, it is a variation of the frog image that the artist drew as a cover for his 1983 eponymous “Hi, How Are You?” album.

The artwork gained worldwide acclaim when Kurt Cobain put on a T-shirt emblazoned with the image during his 1991 promotional tour. The Frog eventually appeared in Rolling Stone magazine and has been a fixture on the Drag ever since, surviving building remodels and the occasional prankster vandalism. The friendly-looking amphibian has spawned an entire industry around it and in 2014 was declared a cultural landmark. The mural is now lovingly preserved by the current “Thai, How Are You?” restaurant owner.

If you only have time to check out just one mural in Austin, the “Austintatious” mural, also known as the Stephen F. Austin mural, should be it. Located at the 23rd Street Artists’ Market on Guadalupe Street, which is an outdoor area with booths selling locally made art, jewelry, clothing, leather goods and various oddities surrounded by the student oriented Drag shopping strip directly across from the University of Texas, it is indeed a sort of a touchstone for guests of Austin.

This was one of the first outdoor murals in the city, first painted in 1974 by a group of friends including artist/comedian/musician Kerry Awn, Tom Bauman and Rick Turner, collectively known as the “Austintatious Artists”. In essence, the massive mural represents a comical walkthrough of Austin’s history and culture. Among the depicted highlights here are the landmarks of downtown Austin, such as the Texas Capitol, the UT Tower and the Ritz Theater on the one side, and those of the entire state of Texas on the other.

The artists painted the wall white and then projected a comic book drawing onto it, which they traced with charcoal. They then filled in the colors and details with help from their friends, including muralist Jim Franklin, who painted the armadillos held by Stephen F. Austin in the center.

The mural was vandalized in 2014, but the original artists weren't ready to let their work fade into history just yet, so they raised funds, rented a power washer and painstakingly restored the mural themselves.

6) "Music Legends on The Drag" Murals

Just a block away from the Austintatious Mural, sitting on the corner of 24th and Guadalupe in Austin are two more beautiful murals: a gigantic movie-themed piece on the old Intellectual Property / Tower Records building; and a dreamlike warped mural on the side of the Wells Fargo Bank (former GAP building). At the street level of the old Tower Records building you can find many stencil-based pieces featuring famous rock stars, created by the prolific Austin artist Federico Archuleta.
Image Courtesy of Flickr and Philip Kromer.

Northwest downtown Austin boasts an impressive collection of historic residences of notable styles, ranging from classic Victorian to Georgian to Greek Revival. Carefully preserved and restored, these constructions – from nationally listed historic sites to the significant local elements of the built environment – form a major part of Austin’s cultural heritage and indelible chapter of its...  view more

Despite the official status of Texas' capital, Austin never fails to surprise visitors with its unique artsy community and lively atmosphere. The city proudly wears the title of "The Live Music Capital of the World" thanks to the eclectic live-music scene centered around country, blues and rock, established since the 1970s by the likes of Willie Nelson, Asleep at the Wheel, and...  view more