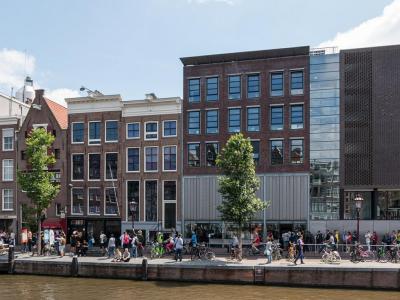 The name Anne Frank rings bell to many across the Netherlands and is that of a 13-year-old Jewish girl who, together with her family, fled their native Germany after the Nazis took over, seeking refuge in the Netherlands. Little did they expect that the Nazi terror would soon spread into the neighboring countries as well.

The Anne Frank House on Prinsengracht Canal is the place where the Franks spent over two years in hiding along with the Van Pel family. The house was built in 1635 and, throughout its existence, had served many purposes, including a residence, warehouse, stable, and office. In 1940, Otto Frank, Anne’s father bought it as an office for his spice business. Soon the office became a hideout from the German troops who were rounding up Jewish families and sending them to concentration camps. The Anne Frank House is a haunting, tragic and overwhelming experience that gives you a glimpse of how the inmates tried to live their lives in the midst of horror.

Today the premise has become a museum, which gives the viewer a peek into the lives of those in hiding. A definite recommendation whether or not you have read Anne Frank's diary.

Why You Should Visit:
Does a great job preserving Anne's and her family's memory, while also teaching about the atrocities of the Holocaust.

Tip:
Make sure you book early; also, be aware that there are lots of stairs and no pictures allowed in the house.