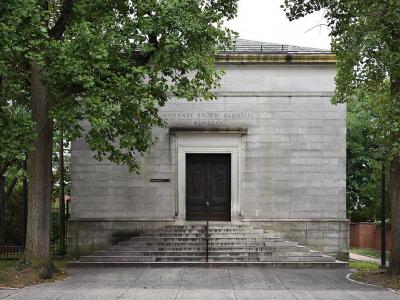 Annmary Brown Memorial is an art museum, library and a mausoleum at Brown University. The building was constructed between 1903 and 1907, designed by Rhode Island architect Norman Isham. Its monumental bronze doors feature allegorical representations of Art and Learning, signaling to visitors that the building contains many cultural treasures inside well worth exploring. Before merging with the university in 1948, the museum was established as an independent collection by General Rush C. Hawkins and his wife, Annmary Brown.

The Memorial's book section is one of the five libraries making up Brown University Library system. Previously, it had contained a collection of 450 incunabula and other ancient tomes and manuscripts, before it was transferred to the John Hay Library in 1990.

Personal mementos of the founder and the Brown family, as well as the Cyril and Harriet Mazansky British Sword Collection are also displayed at the gallery. At the rear of the building, there is a crypt holding the remains of Annmary Brown and General Hawkins themselves.

The venue is open Monday through Friday, from 1:00 to 5:00 pm during the academic year, Labor Day through Memorial Day.
Image by Filetime on Wikimedia under Creative Commons License.
Sight description based on wikipedia