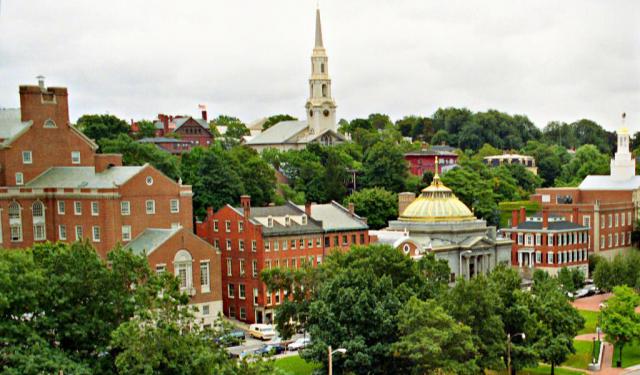 Image by Will Hart on Flickr under Creative Commons License.

Providence is a beautiful city that was founded on the banks of the Providence River in 1636 by Roger Williams. The city is nearly as old as the United States themselves. It has many interesting historical and architectural landmarks. Take this self-guided walking tour to visit some of the Providence's historical buildings.
How it works: Download the app "GPSmyCity: Walks in 1K+ Cities" from iTunes App Store or Google Play to your mobile phone or tablet. The app turns your mobile device into a personal tour guide and its built-in GPS navigation functions guide you from one tour stop to next. The app works offline, so no data plan is needed when traveling abroad.

The Providence County Courthouse, or Licht Judicial Complex, is a Georgian-styled building in the College Hill neighborhood of Providence. At a height of 216 ft (66 m), it is the 11th-tallest building in the city.

Architectural historian McKenzie Woodward lauds the building for its contextualism, which defers in its design to the buildings surrounding. Woodward also commends the fragmentation of the building's large mass into "visually digestible units". The Rhode Island Supreme Court and Providence Superior County Court are located within the building.

Image by Kenneth C. Zirkel on Wikimedia under Creative Commons License.
Sight description based on wikipedia
2

Old Stone Bank's most prominent feature is its amazing golden dome. The bank was built in 1854 in the Greek Revival style by C.J. and J.R. Hall. It originally housed a bank, but today Brown University uses the building as a venue for art exhibitions and events. The Old Stone Bank is one of the few buildings in Providence that has remained virtually unchanged from its original state.
Image by Kenneth C. Zirkel on Wikimedia under Creative Commons License.
3

The Governor Stephen Hopkins House, built in 1708, is a museum that was the home of Stephen Hopkins, a governor of Rhode Island and signatory of the Declaration of Independence.

Stephen Hopkins purchased the house in 1743 and made a large two story addition to the original house that was built in 1708. The house is now owned and managed by the National Society of the Colonial Dames of America. It was declared a National Historic Landmark in 1978.

Image by Filetime on Wikimedia under Creative Commons License.
Sight description based on wikipedia
4

Image by Kenneth C. Zirkel on Wikimedia under Creative Commons License.
Sight description based on wikipedia
5

The Brick Schoolhouse (Meeting Street School or Providence Preservation Society) is an historic colonial meeting house and school at 24 Meeting Street. The school was built in 1768 to serve as a school and meeting place for town meetings. When Brown University moved from Warren to Providence in 1770, the building temporarily housed the school and classes were again held at the school after University Hall housed French troops during the American Revolution.

In the 1790s a group of Rhode Islanders led by John Howland successfully advocated for free public schools, and started one of the first free public schools in 1800 within the Brick Schoolhouse at 24 Meeting Street. Over the next two centuries the building housed various schools including "a school for black children, a cooking school, and a fresh air school for tubercular children, the first such program in America.

From 1946 to 1957, the Meeting Street School met in the Brick Schoolhouse" educating children with cerebral palsy. The building was added to the National Register of Historic Places in 1972. The building currently serves as the headquarters for the Providence Preservation Society, a group founded in 1958, which hosts various educational and community events at the property.
Image by Beyond My Ken on Wikimedia under Creative Commons License.
Sight description based on wikipedia
6

From colonial times to the mid-19th century, the Rhode Island General Assembly rotated meetings between the state's five county court houses, and five former Rhode Island state houses survive nowadays. In 1760 The General Assembly built the Old State House to replace an earlier wooden courthouse built 1730 on Meeting Street. It was largely finished by 1762 with some details being completed by 1771. Many of the Georgian architecture details were borrowed from the larger and more ornate Newport Colony House. Before 19th century alterations to the Providence State House, the two buildings resembled one another greatly. In the 19th century the large center-front tower was added. After 1853 the state legislature ceased meeting at Kent, Washington and Bristol county courthouses, but continued to alternate its sessions between here and the Newport State House in Newport into the early 20th century.At the Old State House on May 4, 1776, the General Assembly declared its independence renouncing its allegiance to the British crown, and the date is now celebrated as Rhode Island Independence Day. Debates about slavery occurred in the building in the late 18th century. George Washington visited the building in 1781 and 1790.
Image by Marcbela on Wikimedia under Creative Commons License.
Sight description based on wikipedia
7

Old Court Bed & Breakfast was first built in 1863 by Alpheus Morse. It is a beautiful Victorian-style building that is full of lovely 19th-century furniture. Some people believe that local writer H.P. Lovecraft based the home of Dr. Elihu Whipple in his book "The Shunned House" on this bed & breakfast.
Image by Old Court Bed & Breakfast under Creative Commons License.
8

The Sullivan Dorr House was built from 1809 to 1810 and was designed by John Holden Greene. The house is a mixture of Palladian, Georgian, and Gothic styles. It belonged to the famous Providence family, the Dorrs. The house is located on land that once belonged to Roger Williams, who founded the colony of Providence in 1636. Williams was initially buried here, but his remains were later moved to Prospect Terrace Park.
Image by Reading Tom on Flickr under Creative Commons License.
9

The Sarah Helen Whitman House, also known as the John Reynolds House, was built between 1783 and 1792. The building is famous for being the home of Sarah Helen Whitman, a woman who writer Edgar Allan Poe once courted. Whitman was a poet and essayist herself. The house is located next to the Cathedral of St. John.
Image by Will Hart on Flickr under Creative Commons License.
10

The cornerstone for St. John's Church was laid in 1810 and the church was dedicated in 1811. The building was designed by Federal-era architect John Holden Greene, who designed many buildings in Providence. A Cathedral corporation was formed in 1909 and in 1929, the church was designated the Episcopal seat. The building was renovated in 1855, 1866, 1906, and 1967, and still retains its architectural integrity, but is in a state of deterioration and was listed on the Providence Preservation Society 10 Most Endangered Properties List in 2007, 2008 and 2010.
Image by Filetime on Wikimedia under Creative Commons License.
Sight description based on wikipedia
11

Fleur-de-Lis Studios, also known as the Sydney Burleigh Studio, is a National Historic Landmark. It was designed in 1885 by painter Sydney R. Burleigh and architect Edmund R. Willson. It now houses the Providence Art Club, which is believed to be the second oldest art club in the U.S. The house is a fine example of the American Arts & Crafts Movement.
Image by Daniel Case on Wikimedia under Creative Commons License.
12

Market House is an historic market house in Market Square. The house was built in 1775. Originally, the bottom level of the structure was used as a market and the upper level was used for holding meetings in the tradition of English public market buildings. Similar buildings existed in other American cities, such as Faneuil Hall in Boston and the Old Brick Market in Newport. Providence's Market House was added to the National Register of Historic Places in 1972.
Image by Filetime on Wikimedia under Creative Commons License.
Sight description based on wikipedia

All of this is located within the heart of Rhode Island’s vibrant capital city, known for its restaurants, innovative arts scene, youthful energy and...  view more