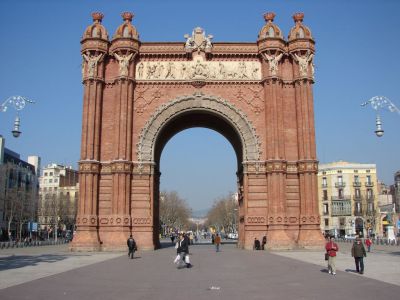 Marking the inland gateway to Parc de la Ciutadella, this imposing brick structure is the precursor of the architectural marvels awaiting visitors further inside the park. The Arch of Triumph was built for the Universal Exposition of 1888 and initially served as the event's main gate. Years on, the arch still looks impressive, even from a distance.

Its decoration comprises four monumental friezes: the one at the front depicts Barcelona as a woman welcoming world's nations to the Exposition; the one at the back features the same woman giving out the awards; while the side friezes each symbolize respectively the Exposition's main sections, namely: Agriculture, Industry, Trade, and Art.

The arch reflects Mudejar architectural style, the origins of which are distinctively Moorish which, in turn, make it stand out from the crowd of other similar triumphal arches around the world. Also adding to its appeal is the adjacent alley lined with palm trees – reportedly, the most attractive palm-tree species found in Barcelona.

The arch is a popular photo sight with tourists and is just as much loved by the locals too, considering the number of joggers, rollers, or picnickers regularly flocking nearby.

Tip:
The surrounding El Born area abounds in cafés and baking shops catering to the tastes of lovers of cakes and of other delicacies. If you're a sweet tooth yourself, make sure to give your taste buds a good treat!
Image Courtesy of Wikimedia and Bajajvikram.