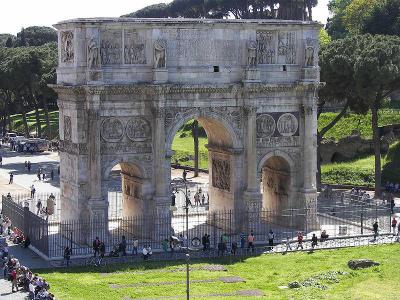 The Arch of Constantine is the last triumphal arch erected in Rome, but also the largest and, arguably, the most beautiful of them all. It is named after the Roman Emperor Constantine, best known for his political transformation of the Roman Empire and support for Christianity.

The 3rd century AD was a turbulent period in Roman history, seeing the empire split into several belligerent fractions. In 312 AD, Constantine took over the western part of the empire by defeating his rival Maxentius and eventually established himself as the supreme ruler, thus bringing the much-needed stability to Rome.

The arch was built in memory of Constantine's victory, portrayed back then as the rightful ruler, over the largely outnumbering his army troops of Maxentius, presented as the tyrant. The latter ended up driven into the Tiber River, the moment of which is depicted in the arch frieze.

Constantine believed that this improbable victory resulted mainly from the help of the Christian Messiah. Subsequently, under Constantine's reign, no persecution of Christians continued and Christianity itself eventually became the official religion of Rome. Whether intentional or not, this was a brilliant political move as, by that time, Rome was already being overthrown by Christian masses.

The arch is free to access – standing amid the public road, once known as Via Triumphalis – the former triumphant passage into the city taken by emperors. Although fenced off, the arch is well visible from the outside, any time, day or night.

Why You Should Visit:
Largest and arguably most beautifully sculpted of all triumphal arches in Rome. Remarkably well preserved, you can feel history just by looking at it.
Has three openings instead of just one, and depictions of some of the first Early Christian examples of sculpture.

Tip:
Take the time to marvel at the carving details, or at least snap a photo to enjoy them later.
Image Courtesy of Wikimedia and Wknight94.