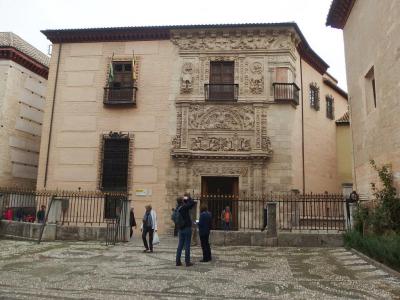 Editor's note: The museum is temporarily closed for renovation.

The Archaeological Museum is housed in the House of Castril, a villa built by heirs of the Catholic Kings in 1539. Its elegant façade was designed by Sebastian de Alcantara. In 1917, the House of Castril was acquired by Leopoldo Eguilaz y Yanguas. A keen Orientalist, Yanguas turned the palace into a museum of archaeology for the city, to better preserve Granada’s long history, and the Eastern influences that shaped it. The house has two floors, with a colonnaded courtyard at the centre, all of which is occupied by the museum. There are seven galleries in total covering a number of different archaeological eras. Visitors first pass through a gallery on the Palaeolithic period, with many exhibits on the evolution of prehistoric man. The second and third galleries demonstrate the progress of man up to the Bronze Age.

The museum’s second section, comprised of four galleries, present artefacts from different ages of the modern colonial era, including many exhibits from Roman and Arabic culture. Items on display include weapons, vases, urns and pottery. The later sections demonstrate the many different cultures which have lived in Granada throughout the city’s long history. The museum generally focuses on local archaeological finds, though exhibits from around the world are included. Admission is free to EU citizens, and costs 1.50 Euros for others. It is worth noting that the museum stays open through the afternoon, when many churches and museums in the city close for the traditional siesta period.