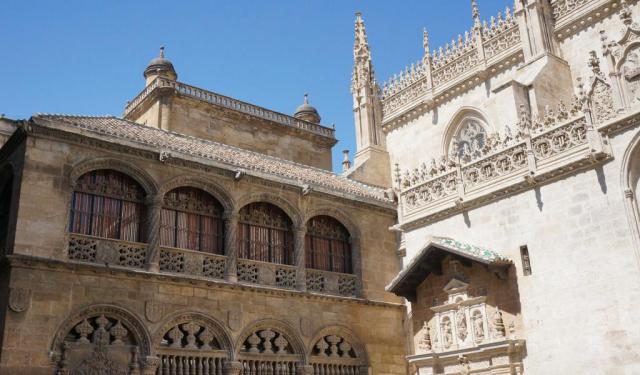 Image by Alberto-g-rovi on Wikimedia under Creative Commons License.

Granada has been influenced by four major architectural styles--Moorish, Renaissance, Gothic and Baroque. On this tour of the city, see the Arab time lines imprinted in stone bearing the early Renaissance and Baroque accents. Be amazed by the originality and delicacy of the streets and residential areas of Granada.
How it works: Download the app "GPSmyCity: Walks in 1K+ Cities" from iTunes App Store or Google Play to your mobile phone or tablet. The app turns your mobile device into a personal tour guide and its built-in GPS navigation functions guide you from one tour stop to next. The app works offline, so no data plan is needed when traveling abroad.

The Mezquita del Albaicín (Albaicín Mosque) opened in 2003. It was built as part of the effort to make Islam part of the local community again, as well as to restore the missing link between the present day and 500 years ago when the first mosque was built in Granada in 1492. The Mosque features traditional Arab style with architectural accents of the Nasrid Empire. Nearby stands the San Nicolas church on Plaza de San Nicolas, a beautiful square overlooking Alhambra. Commonly referred to as “Mirador [vista point] de San Nicolas” this is a popular spot to come and enjoy the sunset and admire the magnificent Alhambra complex glowing in the last rays of the descending sun.
Image by Dirk Hartung on Flickr under Creative Commons License.
2

The Palacio de Dar-al-Horra was built by the Emirs of Granada in the 15th century, shortly before their rule was ended by Christian conquistadors. The palace was built upon the remains of a destroyed palace, and is the only Muslim palace in the Albayzin to have been at least partially preserved. The name ‘Dar-al-Horra’ translates from Arabic as ‘the House of the Honest Lady’. This is believed to refer to the mother of King Boabdil, the last Arab monarch of Spain, who lived in the palace until 1492, when Granada was claimed by the Catholic monarchs.

Following the Conquest of Granada, the palace was converted by Queen Isabella into the Santa Isabel la Real convent. Whilst the convent still exists within the palace compound, those parts of the original palace that remain are owned by the government, and listed as a national monument. The palace is filled with examples of Nasrid art, which combines Arabic and European artistic styles. The central courtyard is flanked by two porticoes, with a small pool and fountain in the southern portico. The northern portico is notable for its horseshoe shaped arches and ornate Medujar style ceiling, made from wood carved in a geometric pattern.

Image by Pepepitos on Wikimedia under Creative Commons License.
3

The Monastery of Santa Isabel la Real stands on the Camino Nuevo de San Nicolás, next to San Miguel Bajo church. It was built on the site of Dar al-Horra, a former Moorish palace. It was founded by Queen Isabella of Castile following the conquest of Granada. The monastery was designed in the Gothic style, known locally as ‘Isabella’s style’ due to its popularity with the Queen. It was completed in the 16th century, and bears her coat of arms on the entrance door.

The church’s interior is notable for several unusual items. These include a Mudejar ceiling above the nave, comprised of fretted woodwork in a style associated with Moorish craftsmen. The church also houses the tomb of sculptor Bernardo Francisco de Mora. The font is formed from the remnants of a fountain recovered from the remains of the palace. The statue of the Virgin Mary, along with several wooden crosses seen on the walls of the monastery, is carried by the resident nuns through Granada’s streets for the Easter parade. The nuns that live at the monastery can be heard singing next to the nave each evening at 7pm. They also sell pastries, which can be bought through a revolving window within the church.

Image by jl FILPO on Flickr under Creative Commons License.
4

This gate is part of the city fortification complex built in the 11th century. This is another example of Nasrid traditional architecture. It forms entrance to Palacio de Dar-al-Horra and the old part of the city, dating to the time of the Arab Empire.
Image by Yoclaudio on Wikimedia under Creative Commons License.
5

The Puerta de Elvira, or Gate of Elvira, once formed the main gate into the city and had a garrison attached to it in order to defend the city. It was built in Moorish times by Yusuf I to protect the Muslim-ruled city from invaders. The city was conquered by the Catholic monarchs shortly after, with a procession marching through the gate to symbolise the victory. Centuries later, Napoleonic troops invaded Granada and destroyed the gate and adjacent fort. Only the archway remains, leading many Granadinos to refer to the structure as simply ‘the arch of Elvira’.

One of many fine examples of Arabic architecture in the city, the Puerta de Elvira has often caused confusion on account of its name. It was once thought that the Moors christened their newly claimed city Elvira in the 8th century, based on the Roman name for Granada – Iliberis. Historians now believe that the Moors called the region around Granada by this name, and also a city which lay to the west, that has all but disappeared. As medieval town gates were universally named after the town they led to, rather than the town they stood in, it is thought that this gate led to another city, known as Elvira. Granada was first known under this name when it was a Jewish citadel, prior to the Moorish invasion.

Image by juanma. on Flickr under Creative Commons License.
6

The University of Granada’s is the city’s principal institution of higher education. It was established in 1531 by Charles V, but has its roots in the Moorish Nasrid dynasty, who were the first to create centres of learning in the city. Originally founded in 1526, it was expanded and made a full university by the order of Pope Clement VII. Today, the college is spread across five campuses, with many faculties located in historic buildings throughout the city. The elegant Centro campus in the downtown area is the university’s main facility. The University also has campuses on another continent - Ceuta and Melilla, Spanish towns located on the northern tip of Africa.

The university is one of the oldest and most distinguished in Spain, and currently comprises seventeen different departments and ten research and development institutes, as well as a range of excellent sporting facilities. It is best known for its modern languages faculty, which hosts up to five thousand international students per year through its extensive exchange and distance learning programmes. Famous alumni of Granada University include British thriller writer Frederick Forsyth and Nicolas Salmerón y Alonso, a moderate 19th century politician who became the President of the First Spanish Republic.
Image by Javier martin on Wikimedia under Creative Commons License.
7

The San Juan de Dios Hospital is located on the Calle San Juan de Dios, in the centre of Granada. It was founded in the sixteenth century and is named in honour of local folk hero, Juan Ciudad Duarte. A humble bookseller, he devoted his life to caring for the sick and needy of Granada following a religious revelation. Duarte was later canonized, becoming San Juan de Dios, or Saint John of God. With the support of donations from the city’s wealthy middle classes, Juan Duarte founded a charity to provide longer term support for Granada’s vulnerable citizens. It was this fund that paid for the design and construction of the hospital.

The hospital is still in operation, and is the city centre’s largest and most important medical centre. The original hospital building is open to the public at no admission cost, and has become a very popular tourist attraction. This is due to its fine Renaissance architectural design. Features of particular interest include the elegant stone façade, and two colourful patios found within the building, depicting local landscape scenes. The hospital has been expanded in recent times and most medical facilities are now housed in the modern extension buildings.
Image by Balbo on Wikimedia under Creative Commons License.