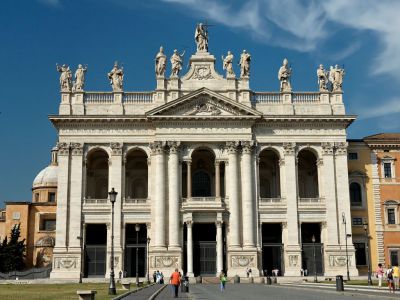 Archbasilica of St. John in Lateran, Rome (must see)

The Basilica of Saint John Lateran was constructed in the 4th century BC and is the first church to be built in Rome. This cathedral is the official ecclesiastical seat of the Pope, and as such is the oldest and foremost building of the four Papal Basilicas. Although located outside the Vatican City, it has extraterritorial status because it belongs to the Holy See.

The basilica was built on the site of a fort put up by Septimus Severus in 193AD, the remains of which lie beneath the nave. During the early Roman Empire, the rest of the site was occupied by the Laterani – the emperors’ administrators. When the Basilica was finished it became the seat of the Pope and known as the Mother Church of the whole Catholic world. It holds the Papal cathedra and is more important than St Peter’s Basilica. During the Avignon Papacy, St John Lateran fell into disrepair and was twice damaged by fire. When the papacy returned to Italy, the basilica was in no state to receive the pope, in spite of renovations, and the Pontiff settled in the Palace of the Vatican.

The basilica has been renovated over the centuries and its present facade dates back to the 18th century. On the roof are statues of Christ and the Apostles. The central bronze doors come from the ancient Roman imperial forum. Beside the doors is a statue of Constantine I. The cosmatesque floor of the nave dates back to the 14th century while the statues of the Apostles in the nave were sculpted in the 18th century. 17th-century bas reliefs depict scenes from the Old Testament and the Altar of the Holy Sacrament is a table believed to have been used during the Last Supper.

Why You Should Visit:
Filled with the history of the early Catholic Church; splendid in its architecture, light, and artwork.

Tip:
There is also a cloister behind the archbasilica, for which you'll be charged a small fee, but you will get to tour a random range of true antiquities dating to pre-Roman times, together with some odd Catholic relics.