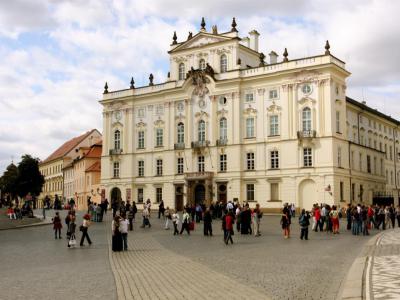 Situated at Castle Square near Prague Castle, this sumptuous vanilla-colored palace came into the hands of Archbishop Anton Brus in the 1560s and has served as the seat of Prague's archbishop and the archdiocese ever since. The Rococo exterior hints at the even more extravagant furnishings inside – an amazing mix of wood-carvings and stuccowork, priceless glass and porcelain vases, as well as unique 18th-century Parisian tapestries in the ceremonial halls.

The only part of the palace that is open to the public is the 16th-century Chapel of St John the Baptist – albeit for a very limited time. If you are lucky enough to be in Prague on the day before Good Friday, don't miss a trip! In the chapel, you will notice a striking painting of the Crucifixion, which was executed under rather gruesome circumstances. Commissioned by the Archbishop of that time, the work was carried out by a young Italian artist who hired a beggar as a model and tied him to a cross. Because the poor man didn't seem to be suffering enough, however, the artist stabbed him through the heart and painted his agony-filled face. After delivering the painting, the artist, full of remorse, committed suicide.
Image Courtesy of Flickr and TravelingOtter.