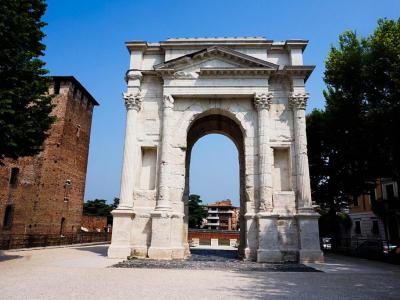 The Arco dei Gavi is a beautiful white limestone triumphal arch located in the center of pizzata del Castelvecchio. It was commissioned by the noble Roman Gavi family. Triumphal arcs were used by the Romans to remember important events, to celebrate the construction of roads or bridges, or to honor the death of an important person. During the Middle Ages the archway was an entrance when the city was surrounded by walls.

The original architect was Lucio Vitruvio Cerdone. The structure was constructed during the first half of the first century CE and marks the portion of Via Postumia that branches off to Verona.

The arch was demolished by the French due to structural problems in 1805. In 1932, it was rebuilt and moved from the Torre degli Orologi del Castelvecchio to its current location. The structure is a very popular spot for tourists and graffiti artists. Even with the addition of spray paint, the beauty of the arch can be fully appreciated.

Recommended restaurants and attractions near the arch include the Antico Caffe Dante, the Officina dei Sapori, the Osteria Il Bertoldo, the Tosca Cafe Verona, the Al Pompiere, the Villa InCanto Opera Lirica, the Castelvecchio, the Chiesa di San Lorenzo, the Monumento a Aleardo Aleardi, the Ponte Scaligero, and the Museo Storico Naturale.
Image by Arnaud Malon on Wikimedia under Creative Commons License.
Sight description based on wikipedia