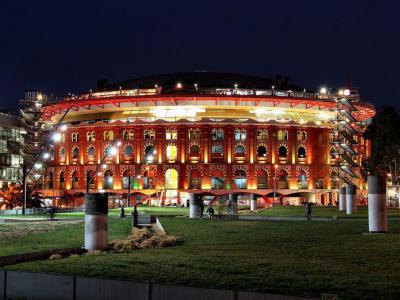 Previously a bullring in Barcelona, the Arenas de Barcelona is now a commercial complex located close to the Placa d’Espanya. The former bullring was built somewhere during 1889-1900. The designer responsible for this project was the Spanish architect by the name of August Font i Carreras. One of the most prominent features of this arena is the horseshoe-shaped entrance which has been adorned with beautiful tiles. The arena itself has been constructed in the Moorish style, which was typical for Carreras.

The huge arena has the capacity to accommodate over 16000 spectators. Its total diameter is around 171 feet (52 meters). Conventionally a bullring, this arena has also played host to many other events such as concerts. One such memorable concert was held in 1966 when the Beatles performed live.

One interesting about the arena is that, although built as a bullring, bullfighting never caught on in the city as much as it was expected to, and the last bullfight took place in 1977, after that the arena remained unused for years. Later it was turned into a recreational and shopping complex, as seen today.

Why You Should Visit:
Exclusive shops, a leisure area with 12 multiplex cinemas, a cultural auditorium, a sports and thermal center of the prestigious Metropolitan chain and several restaurants that offer panoramic views. Even the external structure has been maintained in its splendor and is a particular architecture to admire.

Tip:
To go directly to the top, it is possible to take the panoramic elevator for €1, which can be recovered by taking lunch or anything else at the restaurants on the top deck.