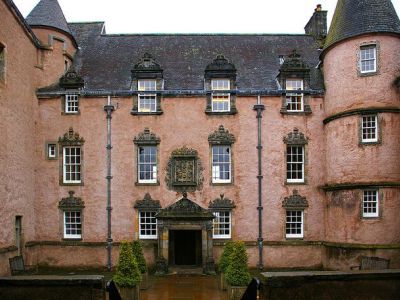 Argyll's Lodging is a 17th-century town-house in the Renaissance style, situated below Stirling Castle in Stirling. It was a residence of the Earl of Stirling and later the Earls of Argyll. The Royal Commission regards it as “the most important surviving town-house of its period in Scotland”. At the end of the 20th century it became a museum.

Argyll's Lodging stands in Castle Wynd on the final approach to Stirling Castle. The plan of the house was originally a "P", the upper part of the "P" consisting of three wings around a courtyard to the west screened from the street by a wall with an entrance gate. The lower part of the "P" was a southwest wing which also bordered the street before it was demolished.

The north wing contained the kitchen on its ground floor, the eastern half being the original building with its early kitchen. The first floor contained the private rooms. The main entrance which is in the central east wing led directly into the Laigh Hall (ground-floor cellar). The first floor of the east wing contained the High Dining Room for entertaining guests and, on the south side, the more private Drawing Room. The ground floor of the south wing contained rooms for the head of the household and the eldest son. The southeastern corner of this wing housed the Lower Dining Room. The first floor of the south wing housed the bedrooms of the Lord and Lady of the house (My Lord and Lady's Bed Chamber) and My Lady's Closet, the private salon of the lady of the house.
Image by Karl Borg on Flickr under Creative Commons License.
Sight description based on wikipedia