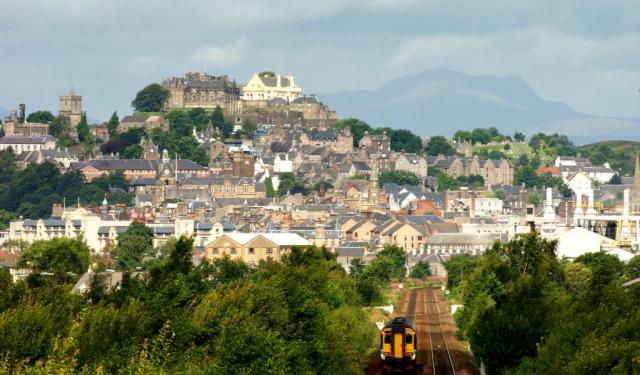 Despite being Scotland's smallest city, the area is filled with history, culture and architectural masterpieces. Thus, Stirling is a phenomenal place to visit and admire the sheer beauty of this interesting city. Take a walk down Stirling's streets and literally also take a walk through history.
Image Courtesy of Flickr and Stirling Council.
How it works: Download the app "GPSmyCity: Walks in 1K+ Cities" from iTunes App Store or Google Play to your mobile phone or tablet. The app turns your mobile device into a personal tour guide and its built-in GPS navigation functions guide you from one tour stop to next. The app works offline, so no data plan is needed when traveling abroad.

Stirling Old Bridge is a stone bridge which crosses the River Forth. For over 300 years it provided the lowest crossing point of the Forth and so had strategic importance.

The stone bridge was constructed on rubble foundations around 1500 and replaced earlier wooden bridges, including that on which the Battle of Stirling Bridge was fought.

The bridge originally had arches at either end and a defensive gate at the end nearer the burgh. Tolls were levied on goods being taken across the bridge.

In December 1745 General Blakeney, lieutenant governor of Stirling Castle, had one of the bridge arches destroyed to hinder the movement of the Jacobite Army. The destroyed arch was rebuilt in 1749.

In May 1833 the adjacent new road bridge was opened to traffic and the Old Bridge was closed to wheeled traffic.


Image Courtesy of Flickr and Colin Baird.
Sight description based on Wikipedia.
2

Stirling Castle is one of the largest and most important castles, both historically and architecturally, in Scotland. The castle sits atop Castle Hill, a volcanic crag, which forms part of the Stirling Sill geological formation. It is surrounded on three sides by steep cliffs, giving it a strong defensive position. Its strategic location, guarding what was, until the 1930s, the farthest downstream crossing of the River Forth, has made it an important fortification from the earliest times. Most of the principal buildings of the castle date from the fifteenth and sixteenth centuries. Several Scottish Kings and Queens have been crowned at Stirling, including Mary, Queen of Scots, in 1543. Stirling Castle is a Scheduled Ancient Monument, and is now a tourist attraction managed by Historic Scotland.

Argyll's Lodging is a 17th-century town-house in the Renaissance style, situated below Stirling Castle in Stirling. It was a residence of the Earl of Stirling and later the Earls of Argyll. The Royal Commission regards it as “the most important surviving town-house of its period in Scotland”. At the end of the 20th century it became a museum.

Argyll's Lodging stands in Castle Wynd on the final approach to Stirling Castle. The plan of the house was originally a "P", the upper part of the "P" consisting of three wings around a courtyard to the west screened from the street by a wall with an entrance gate. The lower part of the "P" was a southwest wing which also bordered the street before it was demolished.

The north wing contained the kitchen on its ground floor, the eastern half being the original building with its early kitchen. The first floor contained the private rooms. The main entrance which is in the central east wing led directly into the Laigh Hall (ground-floor cellar). The first floor of the east wing contained the High Dining Room for entertaining guests and, on the south side, the more private Drawing Room. The ground floor of the south wing contained rooms for the head of the household and the eldest son. The southeastern corner of this wing housed the Lower Dining Room. The first floor of the south wing housed the bedrooms of the Lord and Lady of the house (My Lord and Lady's Bed Chamber) and My Lady's Closet, the private salon of the lady of the house.
Image Courtesy of Flickr and Karl Borg.
Sight description based on Wikipedia.
4

Old Town Cemetery is Scottish history itself. This moving graveyard has found its place among the lines of many famous poets, who wrote "we know of no sweeter cemetery in all of our wanderings than that of Stirling." Amazing words considering they came from the pens of the greatest individuals ever to work with literature. Long ago, knights used to hold tournaments to the delight of their ladies. The cemetery is divided into three distinct sections.
Image Courtesy of Flickr and Shadowgate.
5

5) Church of the Holy Rude (must see)

The Church of the Holy Rude is the second oldest building in Stirling. It was founded in 1129 during the reign of David I (1124 - 1153) as the parish church of Stirling. Nothing of the original structure now remains due to a fire. Construction on the new nave was underway by 1414, and based on the heraldry the vault of the nave was completed between 1440 and 1480. Work on the chancel did not commence until 1507 and completed around 1530 which was when the west tower was also extended to its current height.

King James VI was crowned King of Scots on 29 July 1567; John Knox performed the ceremony. This makes the Church of the Holy Rude and Westminster Abbey the only churches in Britain still in use to this day that have been the sites of coronations.
Image Courtesy of Flickr and Michael McCarthy.
Sight description based on Wikipedia.
6

6) Broad Street and the Tolbooth

***Once a huddle of overcrowded tenements and Common Lodging Houses, shadowed by the grim tower of the Tolbooth, Broad Street - site of the weekly market and public punishments from the 12th-to-19th-centuries, has a dark history.
Two weavers, John Baird and Andrew Hardie, were amongst many poor people executed by the Mercat Cross, here – hanged and beheaded in 1820 as Traitors. Their crime? Asking for the right to vote.

It was also the unlikely site of a spate of mass haunting by the ‘Millhall Ghost’ – a white garbed figure which plagued the families of miners from the nearby Millhall Colliery, during the General Strike of 1926. Mobs of local people prowled the street, looking for the spook.***PH***

The original Tolbooth has been for a very long time the heart of Stirling. The building served as its court house, council meeting, treasury, armory and even prison. However, due to its bad shape, the Tolbooth was demolished and rebuilt at the beginning of the 17th century. Fortunately, the new construction featured a rare surviving sample of the dutch pavilion roof. The Tolbooth has completely reinvented itself, now serving as the town's center for music and arts.
Image Courtesy of Wikimedia and Palickap.
7

Stirling Old Town Jail will take you a hundred and fifty years back to experience the life of an ordinary criminal. This magnificent infrastructure from 1847 was designed in a Castellated Gothic style and will teach you a lesson in behaving, as the Victorians were notorious for their unmerciful punishment when dealing with criminals. Today, the jail allows visitors the opportunity to meet its famous inhabitants: the prison warden, the hangman and the convict determined to escape.
Image Courtesy of Wikimedia and Pjt56.
8

The Anthenaeum, built in 1816, was originally used as a library and then eventually underwent remodeling and saw some additions made. It presides over King Street in Stirling with its tall spire and majestic statue of William Wallace (the Braveheart) in front. The King Street is a wide pedestrian zone which forms part of 'The Royal Way' bordered with The Old Victorian Shopping Arcade which, in turn, adds a shopping dimension to this historic venue.
Image Courtesy of Flickr and dun_deagh.
9

The Stirling Arcade is the city's most incredible shopping area, partly due to its historical value and partly due to its outstanding beauty and relaxed surroundings. A designated landmark of the city since its erection in 1882, the building is one of only a few in Stirling, preserving a glorious Victorian style. The Arcade offers a wide variety of stores and original boutiques, many of them being quite specific to the region.
Image Courtesy of Wikimedia and Panama1958.

Stirling Castle is one of Scotland's most historically important sites and was once a favoured residence of the Stewart kings and queens who held grand celebrations at the castle.

In its grandeur with its superb sculptures and beautiful gardens. It was a favoured residence of the Stewart kings and queens who held grand celebrations from christenings to coronations.

Today you can meet...  view more