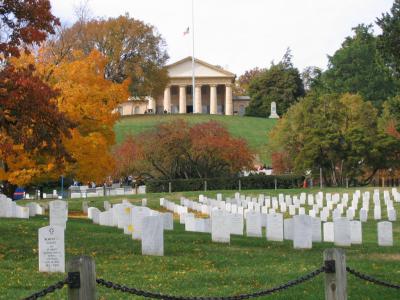 Arlington House, formerly known as the Custis-Lee Mansion, is a Greek revival house that once served as a pre-Civil War residence of legendary Confederate Army General Robert E. Lee. Over the years, the house had been used as a plantation estate and home to 63 slaves, a military headquarters and a community for emancipated slaves, before it was taken over by the federal government in 1864 to serve as a burial site for Civil War soldiers, now known as Arlington National Cemetery. In part, this was done to ensure that Lee would never be able to return to his home again.

The Robert E. Lee Memorial is open for public tours every day. Other than the stunning views of the Potomac River and the National Mall in Washington, D.C. down below, which are absolutely stunning on a clear day, especially in April when cherry trees are in full blossom, there are many more reasons to visit this historic location at the Arlington National Cemetery. This house honors Lee for specific reasons, including his role in promoting peace and reunion after the Civil War. In a larger sense it is a place of study and contemplation of the meaning of some of the most difficult aspects of American History, such as military service, sacrifice, citizenship, duty, loyalty, slavery and freedom.
Image Courtesy of Wikimedia and Protoant.
Sight description based on Wikipedia.