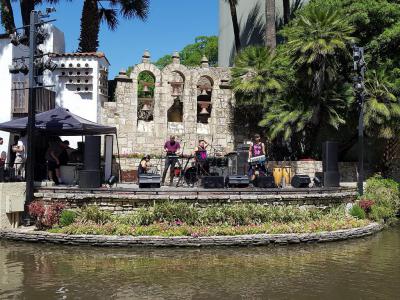 True to its name, the Arneson River Theatre is an outdoor performance theater located on the San Antonio River Walk. This open-air venue was built in 1939-1941 to the design by architect Robert H.H. Hugman and was named for Edwin P. Arneson, the regional engineer for the W.P.A. who died before the construction began.

Many years later, bells had been added to the arches behind the stage that Hugman had designed, named after him. In a belated ceremony, the "Father of the River Walk" struck the bells for the first time, two years before his death.

The venue is best known for its outdoor performances, where the river separates the stage from the audience. The former is on the north side of the river, while the audience sits on the grass-covered steps on the south side with 13 rows of seats that can hold over 800 people.

A nearby stone bridge is often made part of the performance space as well. It is now called Rosita's Bridge in honor of Rosita Fernández, a pioneer of Tejano music, who performed here as a star of the summer-long Fiesta Noche del Rio for 25 years. The theater continues to be used all year round for a wide variety of performances, averaging over 200 per annum, including folkloric groups, festivals, music concerts, plays, dance, opera, and even weddings. Many of the river parades, held throughout the year, are televised from this unique open-air amphitheater.

The theater, along with several other San Antonio landmarks, was featured in the popular 2000 comedy film “Miss Congeniality” starring Sandra Bullock and Michael Caine.
Image Courtesy of Wikimedia and Irid Escent.
Sight description based on Wikipedia.