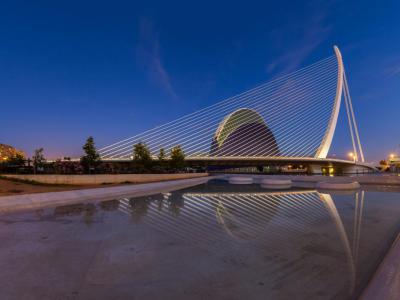 The Assut de l'Or Bridge is a white single-pylon cable-stayed bridge in the City of Arts and Sciences in Valencia, designed by Valencian architect and civil engineer Santiago Calatrava and completed in December 2008. The name l'Assut de l'Or is Valencian for the Dam of the Gold and refers to a dam that was located nearby, although locally it is referred to as El Jamonero (The Ham Holder) or Pont de l'Arpa, Spanish: Puente del Arpa (The Harp Bridge). Calatrava called it the Serreria Bridge.

The bridge crosses the Túria Gardens in southeast Valencia near the east end of the City of Arts and Sciences complex. Its design is a variant of Santiago Calatrava's 1992 design of a cantilever spar cable-stayed bridge in Seville, Spain. In the Serreria bridge, the pylon is curved backward and back-stayed to concrete counterweights in the roadway. The aesthetic effect of the Serreria bridge arises in part from the curved pylon and the 29 parallel cables supporting the bridge deck, accented at night by spot lighting of the cables and the pylon. The bridge deck has two carriageways, three lanes each for cars and one additional lane for a tramway, and a carriageway for only pedestrian and cycle traffic along the middle spine of the deck by the cable stays.
Image Courtesy of Wikimedia and Diego Delso.
Sight description based on Wikipedia.