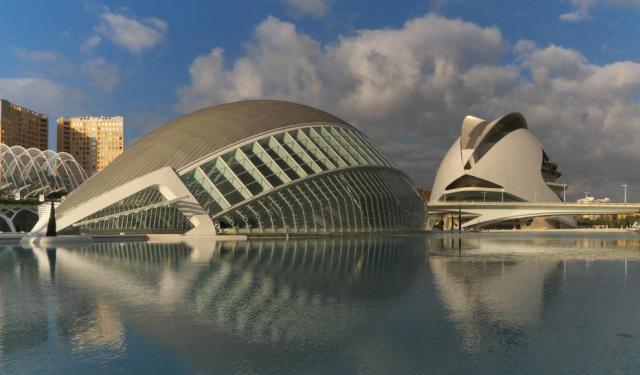 In the course of nearly two decades, from 1991 to 2009, Calatrava produced an ensemble of futuristic buildings and bridges that make up the famous City of Arts and Sciences complex. If only for one reason, it is thanks to these works that Valencia has put itself on the map as a city well worth visiting. Calatrava’s celebration of art and science in Valencia is indeed a must-visit place for architecture buffs, and includes:

L'Umbracle – an outdoor art gallery with sculptures from contemporary artists and a landscaped garden featuring plant species indigenous to Valencia.

L'Hemisfèric – also known as the "eye of knowledge", the building, shaped as a giant eye, houses an IMAX Cinema, planetarium and laserium.

Prince Philip Science Museum – housed in an edifice resembling skeleton of a whale.

Assut de l'Or – the “Dam of the Gold”, a white single-pylon cable-stayed bridge crossing over the Túria Gardens.

L'Àgora (The Agora) – a multi-functional space resembling a pointed ellipse.

If you ever wondered how something so contrasting as the sci-fi compound like this can coexist in the same urban setting with the sunny, paella-scented streets of Valencia, take this self-guided walk and find out!
Image Courtesy of Wikimedia and José Luis Filpo Cabana.
How it works: Download the app "GPSmyCity: Walks in 1K+ Cities" from iTunes App Store or Google Play to your mobile phone or tablet. The app turns your mobile device into a personal tour guide and its built-in GPS navigation functions guide you from one tour stop to next. The app works offline, so no data plan is needed when traveling abroad.

Palau de les Arts Reina Sofía is an opera house, performing arts centre, and urban landmark designed by Santiago Calatrava to anchor the northwest end of the City of Arts and Sciences in Valencia. It opened on 8 October 2005; its first opera staging was of Beethoven's Fidelio on 25 October 2006. Tenor and conductor Plácido Domingo has maintained a special relationship with the Palau since its founding and has established a young singers training program there.

Queen Sofía Palace of the Arts is the last major structure built of a grand City of Arts and Sciences concept designed by the Valencia-born and internationally known architect Santiago Calatrava, which began in 1995. The building was constructed by a joint venture of Dragados and Necso. It was opened officially on 8 October 2005 by Queen Sofia of Spain.

Image Courtesy of Wikimedia and Alberto-g-rovi.
Sight description based on Wikipedia.
2

L'Umbracle, part of the Ciutat de les Arts i les Ciències (City of Arts and Sciences) complex in Valencia, is a sculpture garden and landscaped walk with plant species indigenous to Valencia (such as rockrose, lentisca, romero, honeysuckle, bougainvillea and palm trees). It harbors in its interior The Walk of the Sculptures, an outdoor art gallery with sculptures from contemporary artists (Miquel from Navarre, Francesc Abbot, Yoko Ono and others). The Umbracle is a space that is a home to numerous sculptures surrounded by nature.

It was designed by Santiago Calatrava as an entrance along the south-western edge to the City of Arts and Sciences and as a cover over its car park. L'Umbracle was completed in 2001. It is 320 m long and 60 m wide, located on the southern side of the complex. It has 55 fixed arches and 54 floating arches that stand 18 m high. The arches are parabolic.

Image Courtesy of Wikimedia and Diliff.
Sight description based on Wikipedia.
3

L'Hemisfèric is an IMAX Cinema, planetarium and laserium. The building is meant to resemble a giant eye, and has an approximate surface of 13,000 m². The Hemisfèric, also known as the planetarium or the "eye of knowledge", is the centerpiece of the City of Arts and Sciences.

It was the first building completed in 1998. Its design resembles an eyelid that opens to access the surrounding water pool. The bottom of the pool is glass, creating the illusion of the eye as a whole. This planetarium is a half-sphere in a concrete structure 110 meters long and 55.5 meters wide. The shutter is built of elongated aluminum awnings that fold upward collectively to form a brise soleil roof that opens along the curved axis of the eye. It opens to reveal the dome, the "iris" of the eye, which is the planetarium or Ominax theater. The structure is divided in half by a set of stairs that descend into the vaulted concrete lobby.

The underground spaces are illuminated with the use of translucent glass panels within the walking path. The transparent roof is supported by concrete arches that connect to the sunken gallery. There is a remarkable echo in the building and if two people stand at the two opposite pillars inside of the eye they can speak with each other.

Image Courtesy of Wikimedia and HuseyinUlucay.
Sight description based on Wikipedia.
4

The Museu de les Ciències Príncipe Felipe, Anglicised as "Príncipe Felipe/Prince Philip Science Museum") is an important tourist attraction in Valencia. It is part of the City of Arts and Sciences, and can be found at the end of Luis García Berlanga street. Its director is Spanish science writer and television personality, Manuel Toharia.

The building was designed by Santiago Calatrava and was built by a joint venture of Fomento de Construcciones y Contratas and Necso. It opened on 13 November 2000. It is over 40,000 square meters in area and resembles the skeleton of a whale.

Everything in the museum is graphically displayed recent exhibitions have included subjects as diverse as spy science, climate change, the human body and biometrics.
Image Courtesy of Wikimedia and Mister No.
Sight description based on Wikipedia.
5

The Assut de l'Or Bridge is a white single-pylon cable-stayed bridge in the City of Arts and Sciences in Valencia, designed by Valencian architect and civil engineer Santiago Calatrava and completed in December 2008. The name l'Assut de l'Or is Valencian for the Dam of the Gold and refers to a dam that was located nearby, although locally it is referred to as El Jamonero (The Ham Holder) or Pont de l'Arpa, Spanish: Puente del Arpa (The Harp Bridge). Calatrava called it the Serreria Bridge.

The bridge crosses the Túria Gardens in southeast Valencia near the east end of the City of Arts and Sciences complex. Its design is a variant of Santiago Calatrava's 1992 design of a cantilever spar cable-stayed bridge in Seville, Spain. In the Serreria bridge, the pylon is curved backward and back-stayed to concrete counterweights in the roadway. The aesthetic effect of the Serreria bridge arises in part from the curved pylon and the 29 parallel cables supporting the bridge deck, accented at night by spot lighting of the cables and the pylon. The bridge deck has two carriageways, three lanes each for cars and one additional lane for a tramway, and a carriageway for only pedestrian and cycle traffic along the middle spine of the deck by the cable stays.
Image Courtesy of Wikimedia and Diego Delso.
Sight description based on Wikipedia.
6

L'Àgora (anglicized "The Agora") is a multifunctional covered space designed by Santiago Calatrava located in the Ciutat de les Arts i les Ciències (City of Arts and Sciences) complex.

The building is a diaphanous large arena, with a glass roof along its spine and a movable structure to control the overhead natural light. The tall white steel rib-cage arches give the interior space an organic element, whereas the exterior is geometric and abstract, in day or when illuminated at night.
Image Courtesy of Wikimedia and Diego Delso.
Sight description based on Wikipedia.
7

L'Oceanogràfic is an oceanarium situated on the dry Turia River bed to the southeast of the city center of Valencia where different marine habitats are represented. It was designed by the architect Félix Candela and the structural engineers Alberto Domingo and Carlos Lázaro. It is integrated inside the cultural complex known as the Ciutat de les Arts i de les Ciències (City of Arts and Sciences). It was opened on 14 February 2003.

The park is divided into ten areas: the marine areas are arranged into Mediterranean habitats, the Arctic oceans, islands, the tropics, the temperate seas and the Red Sea. The park also includes a dolphinarium, an area of mangrove swamps and marshland, and a garden with more than 80 different species of plants.

The steel-fiber reinforced concrete thin-shell structure was designed by renown architect Félix Candela, at age 87 in 1997, and structural engineers Alberto Domingo and Carlos Lázaro. The distinctive hyperbolic parabola (hypars) shape of the roof is reminiscent of the Los Manantiales Restaurant in Mexico City, which Candela designed in 1958.

The Oceanographic is currently operated in partnership with the Vancouver Aquarium Marine Science Centre in Vancouver, British Columbia, Canada.
Image Courtesy of Wikimedia and Diliff.
Sight description based on Wikipedia.