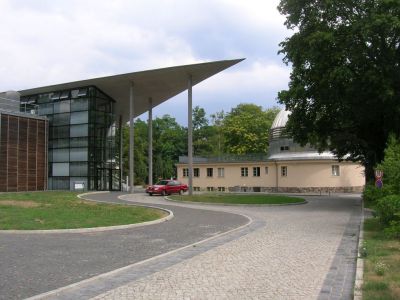 Astrophysical Institute Potsdam (AIP) is a German research institute. It is the successor of the Berlin Observatory, founded in 1700, and of the Astrophysical Observatory Potsdam (AOP), founded in 1874. The latter was the world's first observatory to explicitly emphasize the research area of astrophysics. The AIP was founded in 1992, as part of a re-structuring following German reunification. The key topics of the AIP are cosmic magnetic fields (magnetohydrodynamics) on various scales and extragalactic astrophysics. Astronomical and astrophysical fields studied at the AIP range from solar and stellar physics to stellar and galactic evolution to cosmology. The institute also develops research technology in the fields of spectroscopy and robotic telescopes. The institute is a partner of the Large Binocular Telescope in Arizona; it has erected robotic telescopes in Tenerife and the Antarctic, and it develops astronomical instrumentation for large telescopes such as the VLT of the ESO.
Image by Oth on Wikimedia under Creative Commons License.
Sight description based on wikipedia