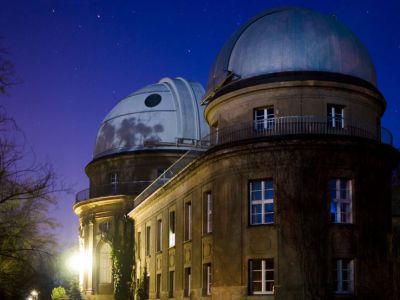 At the end of the 19th century the Berlin Observatory, originally built outside the border of the town, was enclosed by blocks of flats, so scientific observations were almost impossible. Therefore, Foerster proposed the removal of the observatory to a place outside Berlin with better observational conditions. In 1904 he appointed Karl Hermann Struve, former director of the observatory of Königsberg, as his successor to realize this project. After test observations by Paul Guthnick in the summer of 1906, a new site was found on a hill in the eastern part of the Royal Park of Babelsberg. In June 1911 the construction of a new observatory began in Babelsberg and on August 2, 1913, the removal from Berlin to Babelsberg was complete. When the 122 cm telescope (at this time the second largest in the world) was finished, Babelsberg Observatory was the best-equipped observatory in Europe.
Image by Dr.michi on Wikimedia under Creative Commons License.
Sight description based on wikipedia