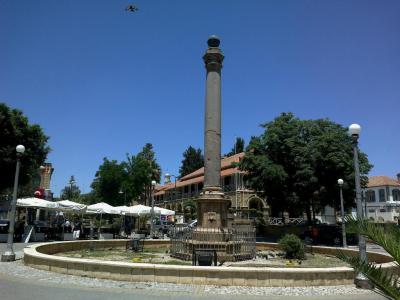 Ataturk Square was named in honor of Mustafa Kemal Ataturk, founding father of modern Turkey. The change was made by the municipal authority of Nicosia, led by Themistoklis Dervis. It is said Mr. Dervis was fishing for the Turkish Cypriot vote. But locals still refer to the square as "Sarayonu", meaning "the front of the palace."

The palace is gone. It was the royal French residence of the Lusignan dynasty. The Lusignans ruled Cyprus until the 15th century, when the island was annexed by Venice. The Venetians erected a granite column surmounted by a lion in front of the palace.

The column was believed to have been taken from the old Temple of Zeus at Salamis. The Ottomans arrived in 1570. They stored the column in the Sarayonu Mosque, which had been a Carmelite church. The lion of the Crusaders was replaced by a British globe when it was moved to the Square in 1915.

The fountain at the square by the law Courts was built in the Ottoman period. It is octagonal in shape with one fountain in a niche on each side. It is maintained by the Turkish Cypriot Department of Antiquities, but it ran dry long ago.

The central Law courts, the Nicosia Post Office, a police station and several banks are around the square. The old palace is gone, razed by the British. However, there is a hotel, also called Saray. You can go to its rooftop restaurant, have a drink and enjoy a view of the entire city.
Image Courtesy of Wikimedia and rene boulay.