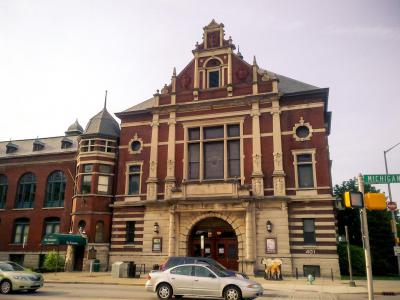 The Athenæum, originally named Das Deutsche Haus (German:The German House), is the most ornate and best-preserved building affiliated with the German American community of Indianapolis. Once used as a German American turnverein and clubhouse, it currently houses many groups, organizations, and businesses. It was founded in 1897 as the, the Musikverein (Music Society) and included a 60-piece orchestra, a male choir, and a mixed choir. The Athenaeum Orchestra is now the oldest orchestra in Indianapolis.

The front part of the building is the East Wing. It is built in the German Romanesque style. The entrance is flanked by two Roman Doric columns, and is arched with a semicircle of limestone. The West Wing is done in the German Renaissance Revival style and incorporates German architecture with Renaissance elements.The facade is decorated with terra cotta grotesques. One figure in particular is Athena, the building's namesake, who is placed in the top arch.
Image Courtesy of Flickr and Rain0975.
Sight description based on Wikipedia.