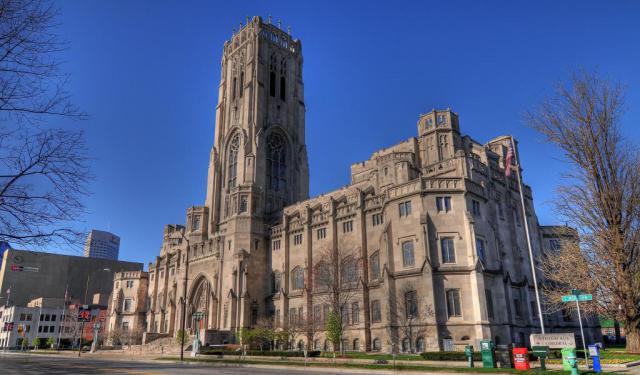 Image by Serge Melki on Flickr under Creative Commons License.

Indianapolis contains an extensive variety of churches which have influenced the social geography of the city. This self-guided walking tour leads you to the city’s oldest and most significant religious architecture.
How it works: Download the app "GPSmyCity: Walks in 1K+ Cities" from iTunes App Store or Google Play to your mobile phone or tablet. The app turns your mobile device into a personal tour guide and its built-in GPS navigation functions guide you from one tour stop to next. The app works offline, so no data plan is needed when traveling abroad.

The Scottish Rite Cathedral was designed by architect George F. Schreiber and plays an essential role in Scottish Rite Freemasonry's life in Indianapolis. This Neo-Gothic building was constructed between 1927 and 1929. Some of the highlights include a 212-foot tower with a carillon known as the "Singing Tower".

Sculptures depicted on the exterior include key figures such as King Solomon and King Hiram. Marble floors at the eastern and southern entrances feature centerpieces with the 12 Zodiac signs. These windows depict important symbolism to Freemasonry, as well as symbolism representing 1920s technology, as well as the liberal arts and sciences.

A ballroom with a floating floor and Elizabethan architecture also has a chandelier with over 200 lights. There is a Cathedral Gothic theater that features over 50 hand-painted backdrops. In addition to taking advantage of tours of this magnificent building, visitors can also stop at the Double Eagle Cafe for lunch.

Image by Diego Delso on Wikimedia under Creative Commons License.
2

Roberts Park United Methodist Church, located downtown, is affiliated with the University of Indianapolis. It is named after Robert R. Roberts, the first Bishop of the Methodist Episcopal Church to reside in Indiana. This building at the corner of Vermont and Delaware streets was erected in 1869.

The Church was dedicated on August 27, 1876, making it the oldest church remaining in downtown Indianapolis. Diedrich A. Bohlen, a German-born architect who immigrated to Indianapolis in the 1850s, designed this early example of Romanesque Revival architecture. The church is considered one of Bohlen's major works. Constructed of Indiana limestone, it has a rectangular plan and includes a bell tower on the southwest corner. The church is known for its interior woodwork, especially a pair of black-walnut staircases leading to galleries (balconies) surrounding the interior of three sides of its large sanctuary.

The bell tower has rounded-arch windows at the first and third level. The second level has a tablet inscribed with the church's name and its construction date. A pyramid-shaped room tops the tower, which houses the church's bell.

The church was added to the National Register of Historic Places on August 19, 1982.

Image by Diego Delso on Wikimedia under Creative Commons License.
Sight description based on wikipedia
3

Architect Hermann Gaul, a native of Cologne, Germany, designed the church. Gargoyles decorate the façade of the church at the entry portal and towers. On the north side, a stained-glass window depicts St. Boniface, the saint who converted the Germans to Christianity. On the south side, another window depicts St. Henry, the “church builder.” The interior has many statues and a apse with skylights.
Image by Vintagejhan on Wikimedia under Creative Commons License.
Sight description based on wikipedia
4

Christ Church Cathedral is the oldest religious building in continuous use in Indianapolis. It was founded in 1837. The present building was constructed in 1857 and is the oldest building on Monument Circle. It became the cathedral for the Diocese of Indianapolis in 1954. It is known for its Choir of Men and Boys and Girls' Choir, and for its pipe organs, one of which was donated by Ruth Lilly. The church was added to the National Register of Historic Places in 1973.

Due to Christ Church's central location in downtown Indianapolis, it became a hub of several charitable activities. During World War II and the Korean War it operated a canteen to feed and entertain thousands of military personnel. The parish is also the host of an annual strawberry festival. Christ Church parishioners held a strawberry festival as early as 1857 to raise funds for construction of the present-day church and held similar church benefits in 1863 and 1864, which marked the beginnings of the parish's successful annual fundraising event. Christ Church Cathedral has hosted a strawberry festival every summer since 1965, raising funds for local, national, and international charities.
Image by Nyttend on Wikimedia under Creative Commons License.
Sight description based on wikipedia
5

St. John the Evangelist Catholic Church is a parish of the Archdiocese of Indianapolis. The church building and the rectory are listed on the National Register of Historic Places. Considered the mother of the Catholic parishes in Indianapolis, it played an important role in development of the Catholic Church in the city. Saint John's Church served as the pro-cathedral of the diocese from 1878 until 1906; its rectory served as the bishop's residence and chancery from 1878 until 1892. In 1900 the church served as the site of first episcopal consecration held in Indianapolis.

The present site on which the church was built was purchased in 1846, and the parish built its second church there. When it became too small, Dietrich Bohlen was hired to design the present church.Bohlen's son, Oscar, designed the twin spires and supervised their construction in 1893. The red-brick church has an eclectic style, including elements of French Gothic Revival and American Romanesque Revival architecture. The sanctuary has a seating capacity of 3,000. It was the largest church in Indiana when the cornerstone was laid in 1867; it was dedicated on July 2, 1871.
Image by Catedrales e Iglesias/Cathedrals and Churches on Flickr under Creative Commons License.
Sight description based on wikipedia