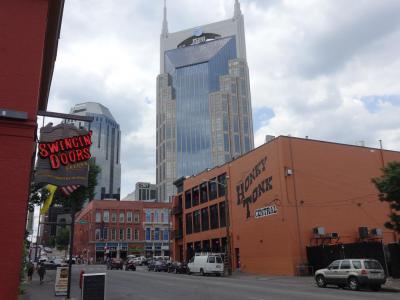 The AT&T Building is a 617 ft (188 m), 33-story skyscraper completed in August 1994. The structure is designed as an office tower capable of housing 2,000 workers and as of 2008 is occupied by two companies. It is currently the tallest building in the state of Tennessee. The building sits on 2.7 acres (11,000 m2) of property on Commerce St between 3rd and 4th Avenues North, and has a footprint of 1⅔ city blocks. It features a three-story winter garden atrium as its foyer and has a nine-story underground parking garage with 1,300 vehicle capacity. Its distinctive design and dark coloration have earned it the nickname "Batman Building", due to its resemblance to the mask of superhero character Batman.

After completion in 1994, the AT&T Building was purchased by Prefco XIV L.P., a limited partnership of the Pitney Bowes Real Estate Financing Corp, for US$100.8 million. Ownership of the building was transferred to Cerberus Capital Management subsidiary EntreCap Financial in July 2006 after Cerberus acquired Prefco. The building was immediately placed back on the market for resell, and in mid-2007 was sold to MTL Leasing LLC for an undisclosed sum. AT&T, previously BellSouth Telecommunications and before that South Central Bell, has operated its Tennessee headquarters out of the building since it was opened in 1994. Prior to 2006, it was the sole occupant of the building, and now occupies approximately 500,000 sq ft (46,000 m2) of office space. AT&T holds a 23.5 year lease which ends January 2020.
Image Courtesy of Flickr and Prayitno.
Sight description based on Wikipedia.