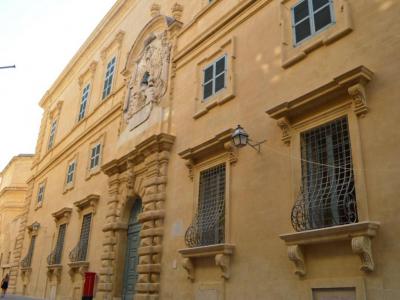 The Auberge d'Italie is an auberge in Valletta, Malta. It was built at various stages in the late 16th century to house knights of the Order of Saint John from the langue of Italy, and it originally had a Mannerist design by Girolamo Cassar and several other architects. The building continued to be modified throughout the course of the 17th century, with the last major renovation being carried out in the 1680s during the magistracy of Gregorio Carafa, giving the building a Baroque character.

After the Order was expelled from Malta in 1798, the auberge was used for a number of purposes, housing a military headquarters, an officers' mess, a museum, a school of arts, a courthouse, the General Post Office and various government departments. Until recently, it housed the Malta Tourism Authority, and there are undergoing works of restoration. It is now converted to host the national collection (previously at National Museum of Fine Arts). In 2018 it became the new National Community Art Museum, MUZA (from the Maltese acronym Mużew Nazzjonali tal-Arti).

MUZA is an art museum located at Auberge d'Italie. It was formerly located at Admiralty House between 1974 and 2016, when it was known as the National Museum of Fine Arts. It houses a collection of works by Maltese and foreign artists mainly representing the major European artistic styles.

The permanent display included the largest collection of paintings by the Southern Italian Baroque artist Mattia Preti (1613–1699), an Italian Knight of the Order of Malta who also contributed to the transformation of the interior of St. John’s Co-Cathedral in Valletta. This, together with a fine and rare collection of antique maps, represented one of the strengths of the collection.

The collection also included the works of two outstanding Maltese sculptors, Melchiorre Gafà (1636–1667) and Antonio Sciortino (1879–1947), and a noteworthy group of Maltese landscapes.
Image Courtesy of Wikimedia and Continentaleurope.
Sight description based on Wikipedia.