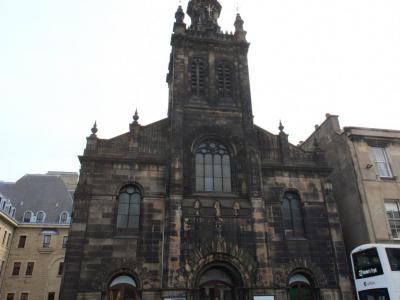 Located on the George IV Bridge, the Augustine United Church was inaugurated in 1861 and for 150 years it has opened its doors to everyone in search of spiritual succour. Visitors are welcome and are invited to leave a small donation if they wish.

Augustine’s is a member of the United Reform Church and today is called Augustine’s Church Centre, as it hosts charities and other Christian projects including Christian Aid. During the week, apart from the usual Christian services and prayer meetings it is used for community and political meetings and musical groups.

One of the most important roles Augustine’s Church Centre plays is in its membership of the Edinburgh Inter-Faith Association. In these troubled days of xenophobia and fear of terrorism, the church invites people from every religious confession, including obscure beliefs and pagans, to monthly meetings where everyone can discuss their religion and their hopes for a future religious harmony. Another group, for women, meet to watch a film and to talk about their place in society and in the diverse religions they follow.

The church also gives help to the poor, the homeless and addicts visit the sick and take part in community projects. A soup kitchen is run by volunteers during the week and they run skills classes which include gardening, weaving and woodwork activities.
Image by Chabe01 on Wikimedia under Creative Commons License.