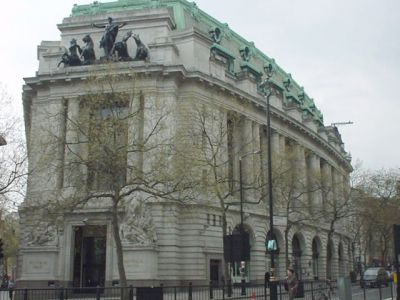 East of Trafalgar Square, just a few minutes up the Strand on the north side of the street, opposite the old Aldwych station, is Australia House - home to the Australian High Commission - the longest continuously occupied foreign mission in London, opened by King George V in 1918.

To Harry Potter fans, however, this building is firmly associated with Gringotts Bank, the only bank of the wizarding world owned and operated by goblins. In the books, its main offices are located in North Side, Diagon Alley in London and, according to Rubeus Hagrid, other than Hogwarts School of Witchcraft and Wizardry, Gringotts is the safest place in the entire wizarding world. The Bank played host to several important scenes in “Harry Potter and the Philosopher’s Stone” and “Harry Potter and the Deathly Hallows – Part 2”. The filmmakers both, filmed inside the real-life location, as well as duplicated it at Leavesden Studios.

The opulent Beaux Arts interior of Australia House - all marble and huge glass chandeliers - was an ideal setting for Gringotts, providing the desired proportions which contrasted perfectly with its inhabitants. As the High Commission, it is not normally open to the public and you need a valid reason to get in - some official business, perhaps, like a visa application, migration, or citizenship. Otherwise, you may get a glimpse of the sumptuous interior by asking the security guards nicely and they may just let you discreetly peep through the door. Please note that the building is open Monday to Friday only, so, if you come on a weekend or public holiday, you will not be able to get a view of the interior.
Image by Lonpicman on Wikimedia under Creative Commons License.

Thirty-three bridges span the Thames river in London, each one with its own story. This self-guided walk takes you to see nine historical bridges in the heart of the city, starting from the storied Westminster Bridge and ending at the iconic Tower Bridge. On this leisurely stroll along the north bank of the Thames, you will also see many historical landmarks of the British capital whilst taking in...  view more

Situated just below Hyde Park, Knightsbridge and South Kensington are two adjacent neighborhoods with grand Victorian homes and leafy garden squares. The area is also a shopper's paradise featuring grand luxury stores, whereas museumgoers will find a number of excellent museums on history, science and arts. On this self guided walking tour, you will visit former Princess Diana's...  view more

Buckingham Palace, the British monarch's official residence, is a must-see for anyone visiting London, but so are the adjacent royal establishments that give a unique window into the royal way of life. On this self-guided walking tour, along with Buckingham Palace, you will visit the St. James's private royal residence, the wonderful Queen's Gallery, and drop by the official...  view more