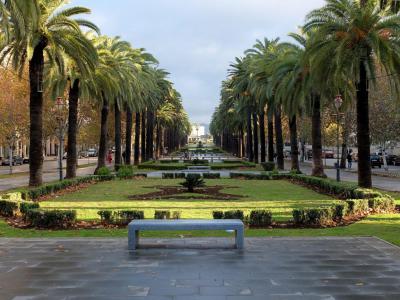 The Ville Nouvelle is centered around Avenue Hassan II, a wide boulevard laid out by the French colonial administration after 1912, and known originally as Avenue de France.

A tree-lined park area, along the middle, runs between the lanes for car traffic for approximately 2 km. At the avenue's northeastern end is Place de la Résistance (originally called Place Gambetta), a large roundabout with a fountain at its center. Further south, along the same avenue, lies Place Florence (originally Place Lyautey), a wide plaza planted with trees and originally designed as a public garden. At the southwest end of the avenue is Place Ahmed El Mansour (originally Place Galliéni).

During the colonial period, the main public buildings of the city were erected along and around this main avenue, featuring a mix of Moresque (neo-Moorish or Moroccan), Art Deco, and Neoclassical styles.

On both sides of the avenue there are arcaded buildings, where cinemas, cafes, restaurants, terraces, ice cream parlors and pastry shops are located. Largely a tourist area, it also features grand hotels, like Hotel Barceló, and modern shopping and entertainment centers, such as the Borg Fez Mall and the Qisariya.

The area of Place Ahmed El Mansour is a home to the Fez City Center, an 80-hectare project comprising residences, offices, hotels and shopping centers, close to the Royal Palace.
Image Courtesy of Wikimedia and Robert Prazeres.
Sight description based on Wikipedia.