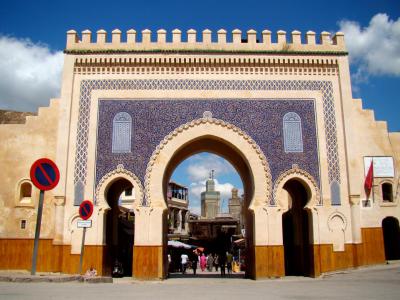 There was a hero in a French movie called "Pepe Le Moko." Pepe was famous for his seductive plea, "Come with me to the Kasbah." Pepe was on the lam. He took refuge in his Kasbah, a densely populated fortified section of the old city. In Fes the gate to both the Kasbah Bou Jeloud and Kasbah en-Nouar is Bab Bou Jeloud, "The Blue Gate."

The original Blue Gate was a simple gate with a pointed arch built in the 12th century. In 1912, Morocco became a French Protectorate. The new administration wanted a more imposing gateway to the old city. Next to the old gate they built the new Blue Gate.

The new Blue Gate is a triple arched structure with pointed arches and a crenelated top. The inner and outer facades are finished with multicolored tiles. The outer facade is blue, the inner, sort of green. It is odd, but the gate locks from the outside. Possibly the French authorities wanted to keep the unruly old city bottled up at night.

On the other side of the gate is a small square with access to Tala'a Kebira and Tala'a Seghira, two main streets leading to the Qarawiyyin Mosque. The new gate copies classic Moroccan Architectural styles. The center arch is the larger, but the streets and alleys of the old city will admit no car traffic.

In the end Pepe was lured out of his hiding place in the impenetrable Kasbah by a woman. Outside the protecting Kasbah he met his doom. What a pity!
Image Courtesy of Wikimedia and Bjørn Christian Tørrissen.