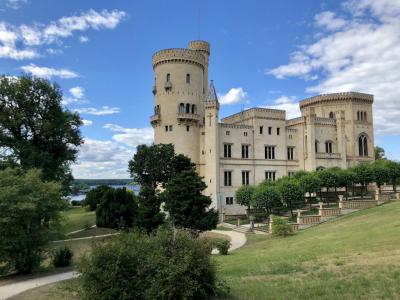 Babelsberg Palace (German: Schloss Babelsberg) lies in the eponymous park and quarter of Potsdam. For over 50 years it was the summer residence of Prince William, later Emperor William I and his wife, Augusta of the House of Saxe-Weimar. On 22 September 1862 in the palace and adjoining park the discussion between King William I and Bismarck took place that ended with the nomination of Bismarck as Minister President and Foreign Minister of Prussia.

The building, designed in the English Gothic style, was built in two phases over the period 1835–1849. The contract to plan the palace was given to the architects Karl Friedrich Schinkel, Ludwig Persius and Johann Heinrich Strack. Babelsberg Palace is managed by the Berlin-Brandenburg Foundation for Prussian Palaces and Gardens and is protected by UNESCO as a world heritage site within the Potsdam ensemble. The architecture of Babelsberg Palace formed the template for the construction of Kittendorf Palace between 1848 and 1853 in the Mecklenburg district of Demmin by Schinkel's pupil, Friedrich Hitzig.
Image by Gunnar Ries on Wikimedia under Creative Commons License.
Sight description based on wikipedia