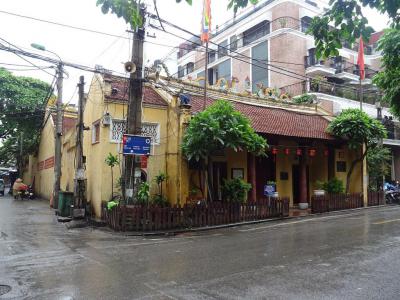 The Bach Ma Temple or the Temple of the White Horse is one of the oldest places of worship in Hanoi. The temple built in 1010 is dedicated to the patron saint of Hanoi, Long Do (Dragon’s Belly).

Bach Ma temple is located in the heart of the old quarter of Hanoi. When King Li Thai transferred his Capital from Hoa Lu to Thang Long (the old name of Hanoi), he decided to build a temple dedicated to Long Do. According to legend a white horse appeared and led the king to the location where the temple was subsequently built. The King began to construct the city walls from this site. Only a few parts of the old structure survive and the present building is the result of reconstruction in the 18th century. The temple has many relics including stone steles that record its history, royal ordinances and records of restorations from the Le to the Nguyen dynasties. A shrine to Confucius was added in 1839. The six sections of the temple include the altar, the square house, the great house of ceremony, the incense chamber, sanctuary and the meeting hall.

Visitors can pass through the old wooden doors of the temple and see some of the treasures within like the statue of the white horse that led the king to the site and a funeral palanquin made of red lacquer.
Image by upyernoz on Flickr under Creative Commons License.