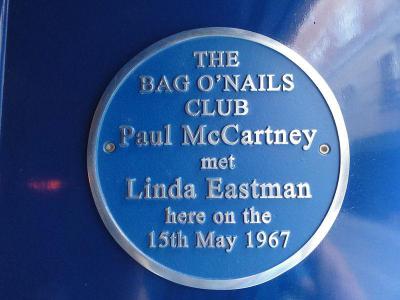 In "Swinging Sixties" London, the Scotch of St. James and the Ad Lib were the top draws for London's rock aristocracy, but the Bag O’Nails surfaced nevertheless as one of the hot clubs of the later part of the decade. Situated at 9 Kingly Street, it’s less than 100 feet from Regent Street – one of London’s busiest, most famous shopping streets – yet so inconspicuous it might as well be hidden anywhere.

The place where Jimi Hendrix played his second London gig, Bag O'Nails was one of The Beatles' favourite venues in 1967-68. Paul McCartney actually had his own private table here and he met his future wife, Linda, at the club on 15 May 1967, when both of them attended to see Georgie Fame and the Blue Flames perform. They married less than two years later and there is a plaque now marking their first meeting.

Attesting to these facts are the two memorial plaques in the doorway for the Beatles fans to check out. As for the bar itself, it shut down in October 2018 but may reopen eventually as a new members' club, called The Court. Remains to be seen...
Image by BH2008 on Wikimedia under Creative Commons License.