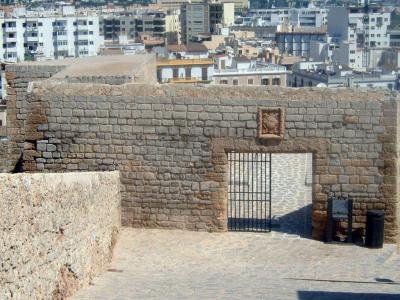 One of the defensive bastions built throughout the Renaissance period, the Baluard de Sant Pere is a UNESCO World Heritage Site found in the heart of the walled enclosure of Dalt Vila, now open to the public. Otherwise known as Portal Nou (New Gateway), this is one of the two main entrances to the Old Town of Ibiza, located next to the park of Queen Sofia.

Crowned with the coat of arms of the Crown of Aragon, the bastion links the park with Plaza del Sol through a stair-filled tunnel: 50 meters long and 3 meters high. The name Portal Nou is probably due to the fact that it replaced the old gateway of dels Aiguaders, which disappeared following the construction of the Renaissance walls. It was designed by the architect Giovanni Battista Calvi.

The Baluard de Sant Pere contains a museum with audiovisual presentations detailing the ingenious construction methods used on the city’s ramparts. Among other things here you will find the original 16th-century wooden doors, intriguing displays of ancient weaponry and other artifacts. Also, climbing to the upper terrace, will afford you an excellent view of Ibiza. The site also frequently hosts open-air concerts.

Opening hours:
Tuesday through Sunday from March until mid-December.
Image by Pat Neary on Flickr under Creative Commons License.