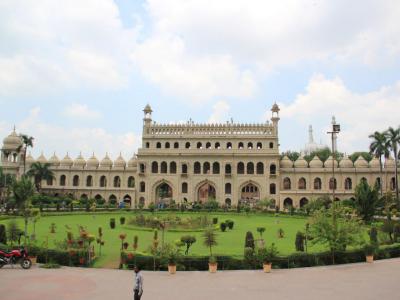 The Bara Imambara, which means big shrine, is a meeting or congregation hall used for Shia Muslim memorial services and ceremonies, especially the Mourning of Muharram and the martyrdom of Hossain Ibn Ali, grandson of the Prophet Muhammad. The Bara Imambara Complex of Lucknow was built in 1794 by Asaf-ud-Daula, the ruler of Awadh, a region in the Indian state of Uttar Pradesh.

The central composition of the Imambara is the Afsi mosque, the Labyrinth, and a Stepwell of running water. Two impressive gateways lead to the main hall. The main gateway has three arches, built in the tradition of Mughal design, an Indo-Islamic type of architecture. A dual fish motif is carved in the gateway. This symbol is often found in buildings commissioned by Indian rulers.

After the main gate is a large forecourt and another gateway with three arches. Passing through this gate, one comes to the Bara Imambara courtyard. Directly ahead is the actual Bara Imambara. On the right is the three-domed mosque and on the left is the water stepwell.

The Bara Imambara is among the grandest buildings in Lucknow. Inside are three halls. The Chinese Hall on the east has decorated domed ceilings. The Persian Hall is the largest. The arched roof is not supported by any columns. It is held up by the arched passageways on the three floors of the labyrinth that hold supportive air cushions.

The last hall is the Watermelon Hall. It is claimed to have a ceiling like a watermelon. The Labyrinth is built above the Imambara. It has nearly 1,000 corridors and 489 identical doorways. The acoustics of the Labyrinth is amazing. The Stepwell has seven levels, with cells at every level. A guide is necessary here.

Construction of Bara Imambara was started in 1780, a year of a devastating famine. One of Asaf-ud-Daula's objectives in the project was to employ people in the region for almost a decade while the famine lasted. The story goes that ordinary people built in the day and nobles tore down at night. This way, the project lasted longer. As an economist, the ruler was ahead of this time.
Image Courtesy of Flickr and Adeel Anwer.