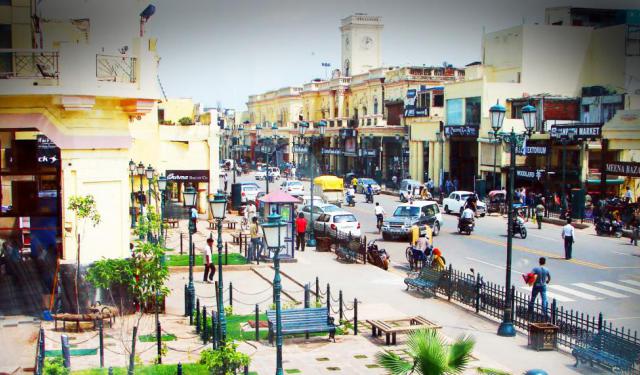 Colloquially referred to as the heart of Lucknow, Hazratganj is the city's central shopping area with numerous malls, showrooms, bazaars, restaurants, hotels, theaters and cafés, as well as governmental offices. Apart from being a paradise for shoppers, it is also a fusion of old and modern architecture, featuring piazzas, green areas with benches and fountains, and wrought-iron and cast-iron lamp-posts flanking the sides of the walkways, reminiscent of the Victorian era.

Hazratganj got its name in 1842, after Nawab Amjad Ali Shah, whose alias was 'Hazrat', and is currently popularly known as ‘Ganj’. After the First War of Independence in 1857, the British took over the city and Hazratganj was modeled after Queen Street in London, with many old Mughal-style buildings demolished and new European structures raised in their place.

In 2010-2011, after nearly 200 years, the neighborhood received a major makeover, during which the buildings were painted in a uniform color. Also, to enhance the architecture, the beautification process involved the construction of stone pavements and Victorian-style balustrades.

Presently, the area is replete with wonderful tourist sights that are certainly worth seeing. Among them are the Uttar Pradesh Vidhan Sabha (Legislative Assembly Building), the Christ Church built as a memorial to the Indian Rebellion victims in the second half of the 19th century, and, of course, the Hazratganj Market.

Other definite must-sees include St. Joseph's Cathedral Church, the biggest church in Lucknow, and Shah Najaf Imambara, a beautiful white-domed palace on the right bank of the Gomti River.

For a closer acquaintance with Hazratganj and its delights, take this self-guided walking tour.
Image Courtesy of Wikimedia and Mohitextreme.
How it works: Download the app "GPSmyCity: Walks in 1K+ Cities" from iTunes App Store or Google Play to your mobile phone or tablet. The app turns your mobile device into a personal tour guide and its built-in GPS navigation functions guide you from one tour stop to next. The app works offline, so no data plan is needed when traveling abroad.

Uttar Pradesh Vidhan Sabha is the Legislative Assembly Building of the Uttar Pradesh province. This imposing structure took six years to complete. The works started in 1922 and the foundation stone was laid by Sir Harcourt Butler, the first governor of Uttar Pradesh (then “the United Provinces of Agra and Oudh”). The building, made of Mirzapur sandstone, features a beautiful unique dome, as well as amazing decorative pillars and arches. Uttar Pradesh Vidhan Sabha houses two of the state legislatures.
Image Courtesy of Wikimedia and Vujn.
2

Christ Church was established in the second half of the 19th century. It was designed and built by General Hutchinson as a memorial to those who were killed during the Indian Rebellion. In 1904 the church was enlarged and renovated. Its beautiful arched doorways and windows create an impression of harmony and lightness. The graceful building features a three-story bell tower, stained glass triptych murals and other art pieces that visitors may enjoy.
Image Courtesy of Wikimedia and DeepanjanGhosh.
3

In 1827 the ruler Nasir-ud-Din Haldar Shah founded what was to become the Ganj market. He opened a Bazaar selling merchandise from China, Japan, and Belgium. In 1842, the shopping area's name was changed to Hazratganj, in honor of the ruler Amjad Aji Shah, known by his nickname "Hazrat."

After the First War of Independence ended in 1857, Lucknow was totally under British occupation. The Hazratganj was modified into a version of London's Queen Street. Mughal-style structures were demolished and replaced with European-style buildings.

The term "ganj" implies strolling along and shopping. Like Connaught Place in New Delhi, Hazratganj is a major shopping district in the city. Car dealerships, jewelry, antiques, books, food, and anything is available at Hazratganj. In 2010, the Market was transformed into a Victorian-style area with lighting, benches, and fountains.

Buildings in the Ganj are both new and old. Some housing shops, restaurants, and cinemas are almost 200 years old. Among the landmarks of Lucknow to be found in Hazratganj are the Mayfair Cinema, the British Council Library, the Lucknow Coffee House, and the Ram Advent Bookshop.

The Ganj is a place for malls. The most popular are Sahara Ganj, City Life, Lucknow-Riverside, Fun Republic, Umrao, City Mall, Wave Mall, and Singapore Mall. Have a lunch break with the rich Lucknowi cuisine at the Royal Cafe. JJ Bakers is dessert heaven. The Cherry Tree Cafe is great for snacks.

Showrooms, shopping complexes, restaurants, hotels, cafes, theaters, and malls abound. And let us not forget the monthly Carnival. On the second Sunday of each month, the Lucknow Development Authority sponsors a carnival in Hazratganj. The Market becomes a vast no-parking zone given over the public entertainment and cultural programs.


Image Courtesy of Wikimedia and Mohit.
4

St. Joseph’s Cathedral Church is the biggest church in Lucknow and a definite must-see attraction. Established in 1860, this church represents an example of a modern architecture rather uncommon for religious buildings in India. The premises feature a wide stairway and a figure of Jesus on the façade.

Shah Najaf Imambara is a beautiful white-domed palace on the right bank of the Gomti River. It was built as a tribute to Prophet Muhammad's son-in-law, Maula Ali. He was also named Haider-E-Khuda, which means "Lion of Allah". The palace serves as the mausoleum for Nawab Ghazi-ud-Din Haider and his wives. The entrance to Shah Najaf Imambara leads to a wonderful garden, as well as to the richly decorated silver tomb.

Note: You will be asked to cover your head with a scarf (freely available) and remove your shoes to enter the mosque area.
Image Courtesy of Flickr and neiljs.
6

Sikandar Bagh is a villa and a four and a half acre garden surrounded by a fortified wall with loopholes, gateway and corner bastions. The garden was laid out by Nawab Saadat Ali Khan around 1800. It was later enriched and a villa was built by the last Nawab of Oudh, Wajid Ali Shah, during the first half of the 19th century, who used it as his summer residence. The garden has a little pavilion in the center, which is thought to have been the scene of innumerable performances and cultural activities, as Nawab Wajid Ali Shah has been extremely fond of his leisure interests. The place has suffered from the British attack in 1857 during the Indian Rebellion and witnessed within its walls the death of all 2,200 sepoy rebels who had made it a fortress during the Siege of Lucknow.
Image Courtesy of Wikimedia and Khalid Ahmed.
Sight description based on Wikipedia.