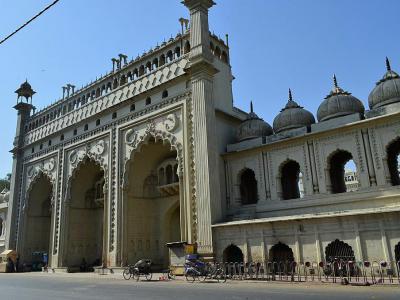 Bara Imambara Entrance Gate features rather restrained and moderate architectural elements comparing to the structures that await visitors inside the complex. The smooth lines of the gate represent a definite example of Mughal architecture. Arched windows and doorways were designed to allow free flow of air, which is typical for Indian architecture, as well as the symmetrical “umbrella” towers with small pikes on the tops.

Construction of Bara Imambara began in 1785, a year of severe famine, and one of Asaf-Ud-Dowlah's objectives in starting this epic project was to provide employment for the population in the region. It is said that common people used to labor on the building during the day, while noblemen and other elite worked at night. Construction of the Imambara complex was finished in 1791. This is one of the last masterpieces in Indian architecture that has not included European elements.

Tip:
Make sure to take a guide from within the complex rather than from the entrance gate.
Image by Khalid Ahmed on Wikimedia under Creative Commons License.
Sight description based on wikipedia